345ash-greninja said:
That fall was from quite a high altitude, so it would have really hurt. After being hurt in that manner, Alolan Vulpix would have been in no shape to battle. So Ash role was important.
Click to expand...

Frozocrone said:
It's honestly not that high. Enough to cause pain, not enough to incapacitate them.
Click to expand...

Well Lillie desperately jumped to catch Alolan Vulpix, which implies that the fall would have quite hurt.

Shhh dont say that! I need my comedic value from PAD somehow!!

In the midst of comedic hijinks it seems like Lillie will be the go to character I’m gonna look towards solid character development and this episode didn’t disappoint. It was nothing groundbreaking but it was a simple of growth for our dear Lillie and for that I enjoyed this one.

I like how the episode didn’t go how I was expecting, instead of avoiding Vulpix because she’s to scared, she spends the day with it in SPITE of her fears, she still wants to spend time and get to know it l, which I really liked. After all she’s a Pokemon trainer now so she has to take responsibility and look after her Pokemon. And for her first battle experience with TR she handles herself believably, having the good sense to fire off am attack and try and stall them by cleverly freezing the ground.

Now that she’s officially a trainer I look forward to seeing what they do with her character from here, what goals she might want to pursue or even some other possible captures in the future….. Or maybe some of that family drama please????
;254;
D

I love Bewear so much, it's dramatic TR rescue wasn't crazy (although it's got some leaps) but that scene with Jessie was hilarious.

The change in character for Lillie between the games and anime kind of gives me some vibes of N, except it's the other way around for N (ie genuine trainer in-game, anime version is around Pokemon but doesn't have Poke Balls). The scale is a little different, though.

So its confirmed that Mimikyu only gives a damn when Pikachu is around which I kinda expected. Not really sure how often that's actually going to happen though. I do enjoy watching it just randomly wander about acting all creepy, speaking of which the way it ate that malasada (or was it Poke Puff?) was a little odd haha.

Liking the fact that Lillie's only okay touching Vulpix for now. She was saying something to it while they were walking that I'd need to see a translation of because it just seemed noteworthy in the context. They managed to hold their own against TR, but Ash and Rowlet did have to stop them from hitting the ground after Lillie hesitated. But that was all he ended up contributing anyway so it's not that big of a deal. Still got a long way to go with her character which is good for future episodes.

I hope Lillie being a trainer doesn't affect how a certain cosmic Pokemon will be handled later. I don't want it in a ball, the bag is its home.
Fanfic Corner:
Pokemon Excalibur - Ash's Galar adventure
Electric Blossom - Bloombolt centric reboot
D

Zoruagible said:
I hope Lillie being a trainer doesn't affect how a certain cosmic Pokemon will be handled later. I don't want it in a ball, the bag is its home.
Click to expand...

As far as I'm aware she doesn't even have the fabled bag. Unless she buys it later.

We've been robbed I tell you.
C

I really liked this episode, it sorta developed everyone in my opinion.
The spying part was specially nice
J

DS0308 said:
As far as I'm aware she doesn't even have the fabled bag. Unless she buys it later.

We've been robbed I tell you.
Click to expand...

They could always come up with some convenient excuse and make it so the Pokeball refuses to catch Cosmog.

Then Lillie would be forced to hide it in a bag.

It would have been better if Prin.Oak gave Lillie some other type of Pokeball rather than the standard one, to signify the aspect from the game.

This one was fun. I'll have to rewatch it with subs to really understand everything but it was a good episode. Especially like how Mimikyu consumed that poképuff. Jessie must have a ridiculously strong spine if she doesn't die from Super-Bewear's hug.

I don't know about you, but I'm hoping for a Lillie vs Gladion in the future.
"Everyone creates the thing they dread. Men of peace create engines of war. Invaders create Avengers. People create... smaller people? Er... children! I lost the word there. Children. Designed to supplant them. To help them end."

U.N. Owen said:
I don't know about you, but I'm hoping for a Lillie vs Gladion in the future.
Click to expand...

I was just thinking this after watching a 'Champion League defence' between Gladion and Lillie on YouTube.

Oh snap, now I want Gladion to be Lillie's rival instead of Ash's lol

This is by far the best 'funniest' face of 'funny face syndrome' of the anime: 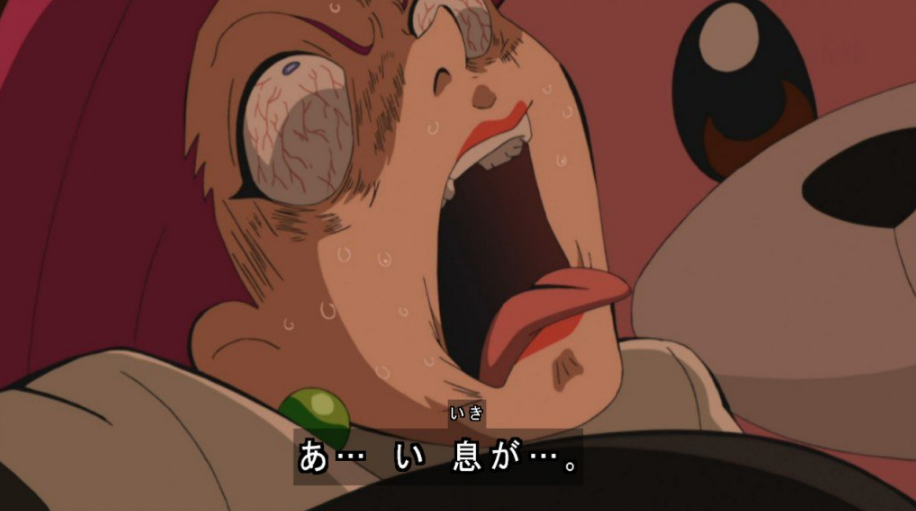 Frozocrone said:
I was just thinking this after watching a 'Champion League defence' between Gladion and Lillie on YouTube.

I agree though, would be great to see sibling rivalry
Click to expand...

I agree too, Lillie vs Gladion would be great to see
I also want to see Ash vs Lillie in future

Ash= unpredictable trainer
Lillie= Smart and knows alot about Pokemon, can probably think some good strategy when she do a battle

i also love How Mallow really care so much about Lillie

AshSerena said:
He said he will take care the Kanto Vulpix , but other one will leave to the student, then everyone agreed that Lillie should be the one who gets and it seems Alola Vulpix also likes her so much xD
I'm happy that she still calling it Shiron even its already born from the egg

and she did a good job on battle againts TR , Since she is smart i can see she will do some good battle strategy on future episodes
Click to expand...

So...what's the likelihood of them keeping the nickname thing in the dub? Betting they'll go with Snowball if they decide to keep it.
This one's stayin' until I complete a novel-length story.

Lucario At Service said:
It would have been better if Prin.Oak gave Lillie some other type of Pokeball rather than the standard one, to signify the aspect from the game.
Click to expand...

True, after seeing Jessie catch Mimikyu with a Luxury Ball, I was hoping we'd see the cast use more unique pokéballs like they do in the games. If I had to pick, I thought that Lillie could've used a Premier Ball to catch Shiron, or Samson could've given her a Friend Ball
Sword/Go/IoA/CRY/CT/Y/BD League Card: Name: Moira MacKay
Hometown: Postwick, Galar
Location: Eterna Forest
Status: Cheryl’s lookin’ for some ancient treasure that belonged to her family
from the Industrial Revolution. Maybe an can use the Diamond Ball tae help her find it.

You do know that Lillie still was saved by Ash from hitting her head into the ground and that Serena was also able to beat Team Rocket before just like Lillie, right? Apparently the only one who isn't able to beat TR is SM Ash.

Anyway, this episode is reminding me of the Pokévision episode. Guess this was written by Omode.
https://www.instagram.com/p/CCY_xmhlzXB/?igshid=390k5n5l9vqh

This episode was... oh my gosh! It was just as adorable as I'd hoped it would be! Watching the two Vulpix play with the other Pokémon was just all kinds of adorable. I found it amusing that Kanto Vulpix was so much friendlier than Alolan Vulpix at first, and it was so cute that Kanto Vulpix kept trying to get Alolan Vulpix--excuse me, Shiron to join in on the fun.

And Lillie was able to touch Shiron! *cheers* It seems the key to getting Lillie to overcome her fear is to put the Pokémon she loves in danger; then she'll touch it without thinking about it, only to realize it minutes later. (Ash, I think you have found a comrade to join your "Recklessness to Save Pokémon" club. )

I had a feeling Ash would show up as the knight in shining armor, but I like the way it was done. He showed up just in time to command Rowlet to use Leafage to break Lillie's fall, but he didn't actually get to battle Team Rocket. (The looks on his and Mallow's faces when Bewear showed up! ^O^ )


U.N. Owen said:
I don't know about you, but I'm hoping for a Lillie vs Gladion in the future.
Click to expand...

That...would be awesome! Now I'm going to start hoping for that, too. It would be interesting if there's still that fond sibling relationship on top of the rivalry--unless the anime makes Gladion more of an antagonist.


Frozocrone said:
This is by far the best 'funniest' face of 'funny face syndrome' of the anime:

That's nightmare fuel right there, dude. I'll need to rewatch the adorable Lillie and Vulpix scenes to get that horrific Jessie face out of my head.

On another note, this episode proved that Mimikyu only obeys Jessie when Pikachu is involved (at least, that's how it appears so far). Though I'm not too sure how I feel about the hinted idea that Jessie may catch Bewear. I was hoping James would get it, but I suppose the man doesn't need two Pokémon unintentionally trying to kill him with love.