The Junior Cup, Site of Partings and Encounters! (754)

did iris reference a real hurricane when she called him hurricane cameron? It sounded really familiar when she said it.

A lots happened in this episode when I think about it but it whizzed past so fast.

I thought the Alder vs Trip battle was the right result but I didn't expect Trip to change his ways in the way he did, I was expecting more of a tantrum and a 'I'll get you next time!' but I liked this one better. Next was a new character named Cameron. I really like the fast paced, act-before-you-think attitude which will create some pure hilarity to the series, I look forward to his future episodes. Finally, we had Dawn's departure ( ), I didn't quite find this one as emotional as the last but I thought the battle between Quilava and Pikachu was brilliant and a Draw was appropriate showing friends as equals. Goodbye Dawn and good luck in the Wallace Cup.

Oh and I forgot to mention Team Rocket which remain secretive between Meloetta and the ruins. I look forward to when all is revealed.

On to the next one!
Loves every part of pokemon, loves the movies, the anime and every game, so you could call me fan lol.

KingMinun said:
And so it ends. I've enjoyed watching episodes again as soon as they air, felt nostalgic and reminded me of the DP days, so Dawn and Piplup have departed, fairplay to her, she always seems to have a good sending off, she had a fantastic one in Memories are made of Bliss, and now she had another good one, was nice to see Ash, Iris and Cilan get sad that she had to leave, but was great that Ash remembered the Wallace Cup. Watching Ash and Dawn battle......it really felt like full circle for me, thinking back to how she began her journey, with Piplup and helping save Pikachu, not having a clue what she was doing, and yet here she is, fighting her best friend in a battle that was filled with epic countering showing just how well they know each other, I'm glad that Cynthia called it a draw, neither of them deserved to lose, they both put up a great fight. Disappointed they didn't keep the original japanese music in Dawn's leaving scene where they played "Friends Anniversary", but it still sounded very similar. Even though she didn't do much, it was great to have her back for a while and interact with new characters like Iris, Cilan, Trip, Burgundy, Georgia and now Cameron. She sure has had luck in meeting
Ash's rivals, Gary, Paul, Barry, and now Trip and Cameron. But now her time is up for now, I really don't think this is the last we'll see of Dawn, yeah I may come off as biased because I'm a Dawn fan boy but she owns Piplup, and for that reason, I see her making more appearances in the future, and so I look forward to tuning in for her next episode. Now if only they would dub her special.
Click to expand...

dude... couldnt agree with you more im a huge dawn fan too
B

It was nice seeing Alder completely shut Trip down, also nice seeing the writer's didn't have him continue his attitude problem and mellow out more. Nice seeing the battle between Ash & Dawn end in a draw, really shows how much much Dawn has come since her journey through Sinnoh.

Why do the writer's feel the need to add the quirky, wacky, sidekick type character we already have Bianca, do we really need another Barry or Morrison in the show. These characters and their actions aren't funny and detract from the enjoyment of the episode I just cringe every time Cameron open's his mouth or is on screen. He is not funny, his actions aren't funny, why do we really need to give Ash another rival? This troupe is worn out, it is a sign of bad writing that we even have a character like Cameron in the series cause Trip was never that interesting.

So this little mini arc was ok, it was disappointing that they brought Dawn back only to relegate her to 4th companion position & not even have her win the Junior Cup or at least come in 2nd, before she leaves for Johto to complete in the Wallace Cup. Also we don't even get a battle between Alder & Cynthia, you have 2 region champs and you don't even let them battle each other.
My Grandmother always said...
"She who walks the path of heaven will rule over everything"

This episode was okay personally. It was the time where I never hated Cameron and was just getting used to the new rival despite the short appearence he made.

Just thought I'd let you know... CITV in the UK is airing the next two episodes after this one (The Road to Humilau and Unrest at the Nursery!) on Friday, 28th December from 7:30am GMT. And on New Years Eve, the next two as well (Meloetta and the Undersea Temple and Unova Survival Crisis!)!
Current Hunt for Shiny Living Dex

WaterDragon trainer said:
This was an ok episode even though I did expect more out of it. It was a bit upsetting to see Dawn leave. It feels like she just came back. Also, I found Cameron to be extremely annoying.
Click to expand...

ya i know how you feel, i wanted her to stay till the unova league , but we mite see her again soon , maybe when ash comes back to kanto she will come visit

Cameron is really silly but I don't care because Riolu finally gets some more screen time! YAY! I literally sqreed (sp?) when Riolu came up on WTP? (In case you haven't guessed I'm a massive Riolu fan. ) Bye bye Dawn, hope to see you again at some point.

So Cameron thought that the UNOVA league was being held in JOHTO. Isn't that like the White House of the United States being located in Pakistan?
Pokemon Heroes: The Black & White Chapter PILOT

"14 year old Hilda is a Pokemon Trainer with a secret: she can talk to Pokemon. After setting off into Unova, she gets involved in the affairs of Team Plasma and becomes acquainted with N, a mysterious guy her age. He may possess the exact same abilities as her but his views couldn't be more different. As her team grows in strength, numbers and bonds, Hilda finds a tangled web of mystery weaving around her and a daunting fate that she can't ever turn her back on..."
J

Trip and Cameron were the highlights of this episode to me. I think Alder just agreed to battle the winner of the Junior Cup to crush the dreams of whichever little kid happened to win it. I don't get why Cynthia had to interrupt Ash vs Dawn but wouldn't have one of Ash's Unova Pokemon been a better option for the battle to show what he has learned in Unova?
Last edited: Feb 3, 2013

Marbi Z said:
Well having seen this episode it's safe to say that Dawn will never be seen or heard from again...
Click to expand...

nahhh how can you say that man , i bet we will see her again
S

First time I saw Cameron. He's like another brother to us. LOL 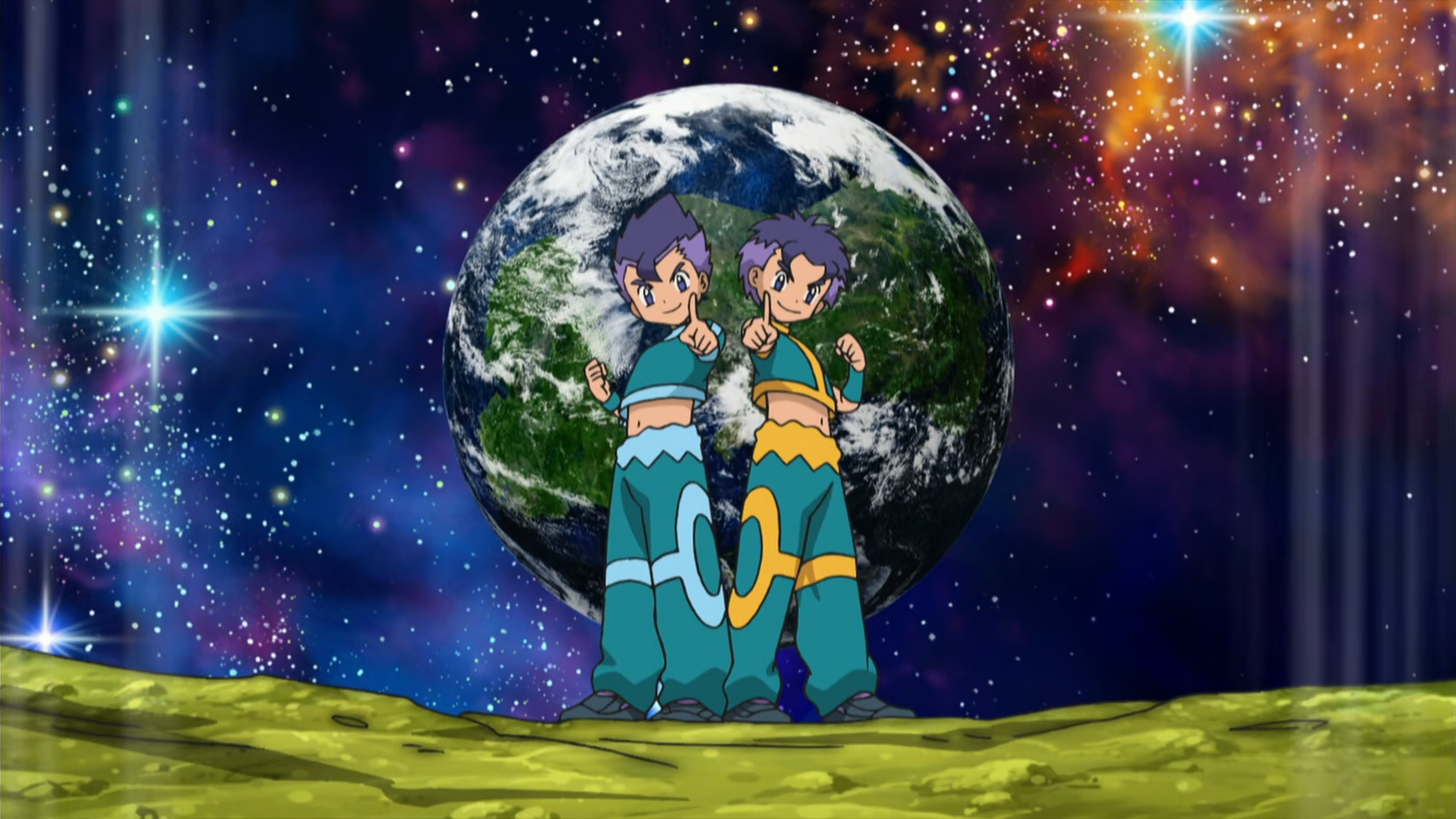 That episode was so rushed omg. sad ;-;

Wanted to see more of Marlon~


And when Dawn left D: That was sad. Since she was planning on going to the Wallace Cup, I was hoping for a brief mention of May but I guess not. Maybe one day the creators will decide to get rid of that one previous region visitor thing they have going on .-.
J

I noticed Trip went through more development in this episode then Ash has done in the entire BW series.

J Ken said:
I noticed Trip went through more development in this episode then Ash has done in the entire BW series.
Click to expand...

Me too. I wished this was done in the first don thing with Ash instead of Iris and Ash and maybe not losing to Bianca would have made me feel better in the Clubplosion thingy.

Too bad that Ash had to lose to Trip, but I guess it was inevitable that Trip really wanted to battle Alden. I did like Piplup and Oshawott's reconciliation goodbye, that was cute. Georgia's "breaking the mold" comment about Burgundy made me LOL too.

I liked how Trip and Serperior were in this episode. Alder's speech to him was good too. Honestly Trip's Alder story was better then Cheren's. Cameron was also good. I wish him and Trip were the center rivals for this season.