The Rock says Stone Cold Steve Austin is the GOAT but I still think Rock is a better talker,more charismatic,more entertaining,cooler,and had the ability to play both heel and face.Corporate Rock and Hollywood Rock were GOLD. 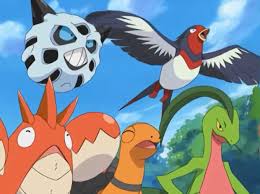 I've been enjoying Smackdown and even parts of Raw for awhile now. Excited for the new management myself. I REALLY hope Wyatt comes back personally.

Unfortunately I can't say the same about Dynamite anymore. WAY too much trying to happen every week in AEW and none of it has any substance or creativity behind it. There's far too many cooks in the kitchen with their roster the way that it is.

Tony needs to learn how to make use of what he has and come up with better storylines, rather than just signing everyone he can just to create another "big" debut or return moment. For as tone deaf as people have always said Vince is (myself included) Tony isn't any better it seems. Other than Punk/MJF, there's been pretty much nothing story-wise to get anyone invested in anything they're doing. Don't get me started on how throwaway Rampage is either.

Another thing that kills AEW for me is the complete tongue in cheek disregard they have for Kayfabe, and yet storylines like Christian vs Jungle Boy don't really work without it.. Ugh. The commentary team and social media fetish wrestling has (especially AEW) is a big part of the problem in my opinion.

Speaking of, where the hell is MJF? Terrible time to have their best asset sitting on the bench.

So, rumor has it that Triple H is in talks to bring back a bunch of former WWE stars now that he's taken over. Didn't list who, but hes "Feeling Out" the situation

and supposedly Sasha Banks and Naomi were in talks to return soon. They didn't sign the contract yet, but the article said it was close to a done deal. They think they will face whoever wins the Vacant Tag Titles.

The one name I hope Triple H brings back is Tegan Nox. She had a lot of potential to be one of the top wrestlers in the women’s division. She just has had poor luck with the injury bug.

In other news, Johnny Ace is officially gone from the company as of today. Another Vince-Yes-man is gone. There are good things happening in WWE right now.

Det. Viper said:
The one name I hope Triple H brings back is Tegan Nox. She had a lot of potential to be one of the top wrestlers in the women’s division. She just has had poor luck with the injury bug.

In other news, Johnny Ace is officially gone from the company as of today. Another Vince-Yes-man is gone. There are good things happening in WWE right now.
Click to expand...

If they go then things can really start to 'change'
Controversial person with controversial opinions apparently.

If they go then things can really start to 'change'
Click to expand...

All four of those you mentioned have to answer to Triple H now. Dunn can’t get anything in TV without approval from Triple H. Pritchard, Kosky & Hayes have to have storylines approved by Triple H. Hayes can only produce matches after they get green lot by Triple H. They have nowhere near the power they had with the previous regime. And the last few weeks of TV has shown that.

Hit Row are reportedly returning on SmackDown tonight. More specifically... Top Dolla and Ashante Adonis. Nothing about B-Fab though and Swerve is now obviously with AEW.

I feel like this is a 'double-edged' sword so to speak. Yes they need more tag teams. So this is better than nothing. I guess? On the other hand... I feel like the group isn't the same without Swerve.

It is what it is I guess but I don't feel this will be a very 'positive' reaction like the Kross and Lumis returns were. Some may even completely dislike this. But it's just one show I suppose.

Triple H supposedly 'isn't letting up' on the returns anytime soon. But it can only last so long obviously. They are setting themselves up to eventually fall into a pit trap. But enjoy it while it lasts I guess.
Controversial person with controversial opinions apparently.

I'm reposting what I posted previously because of the forum rollback.

I apologize for anyone who might hate what I'm about to say... but... I honestly can't take this anymore. I really can't.

I'm getting sick and f-ing tired of AEW bashing WWE and making it seem like them going out of business would be such a great thing. How about you explain to me how this happening is such a great thing? BECAUSE IT'S NOT. Not only that... this isn't a 'every so often' kind of situation. It's happening LITERALLY. EVERY. F-ING. WEEK. It's sickening, tiring, embarrassing and downright petty. THERE'S NO EXCUSE FOR THIS BS ANYMORE. I'm sorry. There just isn't. I could forgive it before. Because there was an obvious reason why. But now? No longer. THE MAIN PROBLEM WITH WWE IS NOW GONE AND HOPEFULLY FOR GOOD. I understand that there is still work to be done and Vince yes men that need to be gotten rid of (Pritchard, Dunn, Kosky and Hayes) but it's not going to happen overnight and will more than likely take a year+ for this to eventually happen. Did they not get the memo or something? Or did they and they just chose not to give a muk? Okay if that's the case then don't expect me to keep watching then. I'm sick and god damn tired of it and I don't think I'm going to take it anymore. If they keep it up... and it happens again... I will quit watching. I'm not joking.

Sorry. This is just how I legitimately feel about this.
Controversial person with controversial opinions apparently.

Did anyone catch CM Punk vs Moxley. What the hell kind of booking was that? AEW has really lost it's spark since MJF left.

Laser Shuckle said:
Did anyone catch CM Punk vs Moxley. What the hell kind of booking was that? AEW has really lost it's spark since MJF left.
Click to expand...

Rematch scheduled for All Out. Supposedly. Reportedly. What I heard. Take that however you want. (everything else after this isn't specifically at you but generally)

I want to hear everyone complain about a rematch on AEW when it's constantly used as a complaint for WWE. What that's? You won't? Yeah that's what I thought.

You constantly sound like you're on social media way too much man.

I don't blame you about quitting watching though. The last couple of months I've been bored by AEW and their disjointed booking.

I'll complain about the rematch because the first match sucked so bad I can't say I want to see them fight again, and taking the title off Punk that fast is just silly, Mox doesn't need the rub and like Punk said is the worst member of the Shield Imo.

Needless to say I'm disappointed. Clash at the Castle has had like 3 times the build All Out has. I know which one I'm looking forward to. (Plus english crowds are always crazy hot.)
P

The Mega Champion said:
Rematch scheduled for All Out. Supposedly. Reportedly. What I heard. Take that however you want. (everything else after this isn't specifically at you but generally)

I want to hear everyone complain about a rematch on AEW when it's constantly used as a complaint for WWE. What that's? You won't? Yeah that's what I thought.

Just curious were you alive for the Monday Night wars. Because during those days WWE and WCW were constantly going after each other. From WCW giving away Mick Foley's title win to DX invading WCW. Do you remember when Rick Rude debuted clean shaved on Nitro and then an hour later showed up on Raw with a mustache. This caused Raw to switch to a live format for every show instead of the 1 live show and then one taped show like they had been doing. Or how about Jericho's debut where the Rock talked crap on Jericho for facing Juventud in WCW and then thinking he had the right to come to Raw and challenge him. I could go on and on.

To me the trash talking is part of the show and always has been. But it does seem to me like you are better off just sticking with WWE.

Looks like Bray Wyatt might be returning. I don't see how this 'White Rabbit' stuff can be for anyone else really. It would be career suicide for HHH to do all of these teases to be someone other than Bray Wyatt.

We'll find out at Extreme Rules probably. Or whenever they feel like doing the reveal I guess.

Tony Khan has officially and literally proved himself to be the 'This Is Fine' meme with his promotion on fire and him refusing to do anything about it.

That's fine. If that's what he wants then so be it. Let me just grab my popcorn as I enjoy watching it burn to the ground.
Controversial person with controversial opinions apparently.

Thanks god Wyatt has returned! Also, I miss Punk... not many reasons to tune into AEW lately.

Staff member
Moderator
I admittedly just found out about Bray Wyatt returning. I haven't watched any wrestling since Roman Reigns beat Drew Mcintyre. I've lost all interest in both WWE and AEW. Maybe Bray Wyatt and MJF can restore my interest.

Mandy Rose has been released by WWE due to possibly explicit photos she put for a subscription fee on something called FanTime. I'm not about to look this up to see what it actually is.

Whether you think WWE are being hypocrites again since they let people have their Twitch channels back (not sure about Cameo though) or think Rose is to blame for not letting the company know about what she was doing is up to you.

Oh... and Vince McMahon is trying to come back to WWE. Let's hope he stays the f away because they clearly have been better off with him gone. Perfect? Of course not. But things take time. It's going to take longer than 6 months (or however long HHH has been in charge at this point) for things to truly 'change'
Controversial person with controversial opinions apparently.

Feels like all the returns to WWE are becoming a bit much for me. Don't get me wrong all of them are talented wrestlers. However, it feels like this will create a problem if they start calling up people from NXT and there are only so many spots on the main roster to go around. Especially since they don't want people to languish in NXT forever the way that people like Angelo Dawkins and Aliyah did.