ChaosBlizzard said:
"Amnesia" is a bad translation. The literal Japanese is "Memory Lapse," which is more accurate. The Pokemon doesn't literally forget something. The idea is more that it pushes trivial troubles and thoughts out of its mind and focuses on the task at hand. The kinds of things it forgets are like "did I leave the stove on?" type stuff; not actual memories.
Click to expand...

What about other attacks I have mentioned?
C

Kacho said:
What about other attacks I have mentioned?
Click to expand...

A Pokemon that can learn Bite or Crunch would presumably be a species with strong/regenerative teeth like a wolf or a shark. A Pokemon that can learn Headbutt, Zen Headbutt or Skull Bash would also presumably be a species with a thick skull to start with like Blastoise or Rampardos. Play to your strengths, basically; if they attempt it, they are probably physically capable of not hurting themselves.
UU RMT
OU RMT What's the Most "valuable" item in Fire Red, that can be traded out? Also which items that uncommon in other games but can be purchased in Kanto?
I have 106655 money and I want to make the best of it before I restart it.
Click to expand...

Aquarius, the queen of Swamperts, and toppler of shiny Clefairies, has graced your presence with her muscly swoleness.​
T

Would you consider it cheating if...

I have been thinking about this for a while, and I am still unsure myself as to where I stand on this matter.

I own my fair share of Pokémon games. I've been a huge fan of Pokémon ever since the anime aired in the Netherlands for the first time back in 1999. At that time I was 10 or 11 years old, and was really inspired by this boy (Ash) which was as old as I am, about to venture forth on his quest to become a Pokémon master. I was one of many. These days though, none of my friends still like Pokémon, better still, they hate it. God knows why.
But to get back to the story. I have bought Pokémon Blue, my brother had Pokémon Red, and a friend of mine had Pokémon Yellow, so I ended up being able to play all of those on my old school refrigerator sized Game Boy. But at that time I did not get as much allowance as I would have liked, and simply did not have the money to get the newer Pokémon games for my gameboy, so I resorted to the next best thing, roms on my computer.
(And no, I am not going to name any emulators, or rom sites I used.)

How ever, when Pokémon Black & White got released, I decided it was time to get back into Pokémon the way it was supposed to be done, by simply purchasing the game in the store or Ebay (!Be careful about purchasing fake cartridges, I've had my fair share >.> ). A friend of mine, who has since then stopped playing Pokémon, offered to sell me all her games at a really low price, and well, who can refuse that . Among other games, there was Pokémon DPPl/HgSs, but also a 'rom-cartridge' which was able to read MicroSD cards, and thus play roms stored on the card, directly on my NDS. Which made me very happy as I could still play and transfer the Pokémon from the roms to the real games. On this 'rom-cartridge' however there were about 20 different Pokémon Diamond and Pearl games. At the time Platinum got released she took them to our local Toys'r'us, and gained a Shaymin on each them. So every Shaymin has been received legit, it's just the game that hasn't been purchased in the store.

Now here is my question:
Would you guys still consider those Shaymin 'illegitimate Pokémon'? The Shaymin itself has been gained legit, it's just that they have been received on a rom, instead of a normal game cartridge.

I would also appreciate it if you could elaborate on the answer you give, instead of just a yes or a no.

So I would not feel bad about using them.

please help my eggs out? I'm new to this so It would be appreciated. 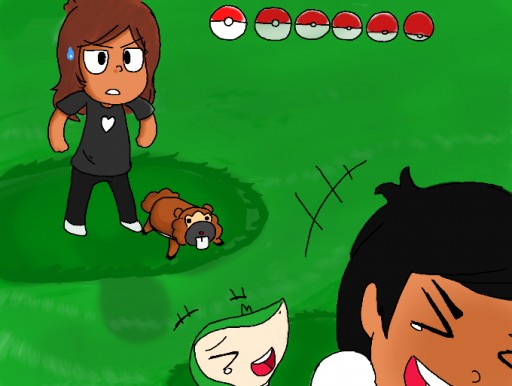 I agree with both of the statements above.

My Gen 6 shinies are Sylveon, Greninja, Delphox, Chesnaught, and Dedenne. The Sylveon 3DS was made by Blood Red Absol.
T

Thank you very much for the replies
I suppose the fact that this threat hasn't exploded in a total flame war, as it usually does on these 'cheat threats' must mean something good . The reasoning T1d3 used is mainly why I would use them myself as well, but I just needed to be sure.

If anyone still has something to add or has a contradicting opinion (with arguments of course ) feel free to post!
~ Thoaee ~ - Poké-fan since 1999

It's sort of like a technicality thing. Technically, all of those are legit and obtained legitamitely. The thing is, the give aways are supposed to be one per cartridge. Otherwise, they would just let us catch them infinitely in game. As long as they aren't hacked, I don't see any problems, though. It depends on what you want to do.
;351;I have officially claimed Castform, The Master of all Weather! ;351;

Honestly I don't consider it cheating, but I kind of do dislike it when people get the event with like all however many of there games just so they have spares, although its smart.. you can trade them for valuables if you want.
Copy/Paste this into your signature if you support a MOTHER 3 remake on the 3DS!-started by ToedandTrue

send this 2 some1 u care about... or a skeleton will rattle his bones at u!
P

They're 100% legit in every way. It's just that it may be a bit unfair for others because they don't have 20 copies of Diamond/Pearl.

they call me Varanus

How do we know that Kyurem has an alternate forme? Is it just because his predecessors, Deoxys, Shaymin, and Giratina, did? Or I assume someone has looked at the coding for it?

DarkLucarioADV;17278134 said:
Varanus already said not to and she's smarter than me so I should Listen to her.
Click to expand...

varanus_komodoensis said:
Or I assume someone has looked at the coding for it?
Click to expand...

Ding Ding.
I'm part of the staff at Project Pokemon! Smod in forums, AOP in IRC, Administrator on Shoddy. Come visit us. Our Project is Pokemon!

People have, there is a facility for Kyurem to support other formes that Many other Pokémon can't. It's very much like Shaymin, and Giratina in DP.
Twitter Mike Sharpe Writer Facebook Taken Wolves of Felwinter Youtube Gaming Scrapbook

really, now could a hacker reveal this form? because his form now is derpy, and his typing is pretty sweet

I Have Claimed the SELF COOKING BACON! EMBOAR

jolteon27 said:
really, now could a hacker reveal this form? because his form now is derpy, and his typing is pretty sweet
Click to expand...

No, almost all the data has been removed. If there was a sprite we would have found it when we pulled all the sprites for Pokémon with Alternate forms.

The only piece we've got says it's either had an alternate form during development and it was removed. Or Game Freak may have planned a second form like Giratina and Shaymin for Grey or RS remake.
Twitter Mike Sharpe Writer Facebook Taken Wolves of Felwinter Youtube Gaming Scrapbook

I believe they haven't made an alternate form for Kyurem that has been implemented in the games, but they left room for one for when it's released in Gray.

I Have Claimed the SELF COOKING BACON! EMBOAR

Sure, it's legit. It was kind of cheap for them to grab 20 Shaymin like that, in my humble opinion, but they're all legitimate.

Congrats on your small army of Shaymin and have fun with your new games! ^_^