Open for the next little while. Closed

Started testing scizor64 for the dark apprentice position. Still need to do him challenging me, but so far so good.

Leader Type: Dark Apprentice Match (scizor64)
Challenger: Marashu
Team used against Leader: Clefable, Cloyster, Crustle, Excadrill, Keldeo, Serperior
Challenger Result: Loss 0-2
Rate your performance: 7/10
Rate opponent's performance: 8/10
Comments about the match: I really like your dark team! You had a couple clutch members that prevented me from being able to sweep, and I guessed the wrong mega, which really mixed up my lead.
Last edited: Jul 12, 2015

Alrighty I got home earlier than I thought, but I still have a few things to do at home (plus the folks are here and they can be distracting) so I'll be open again on Monday wooooooo

Hello everyone, sorry I haven't been online for a while, been incredibly busy. Tomorrow starting college agqin, but at least the classes are in the afternoon xD. Going to try being more available. So...
Elec gym open for a few hours, pm/vm me and I will answer as soon as I can
IGN Sito

Cutty said:
My kitten swallowed my game cartridge (bad pussy!)
But no worries. Its a matter of getting it out. I will open again hopefully sometime next week. Along w/ Fairy gym.
Just leave me a VM/PM to set up a battle.
Click to expand...

bad kitty! :c but yeah thanks for getting my message about the apprenticeship but will try tommorow to open up for at least a few hours depends on how everything goes tommorow as well as I am hatching eggs mad now got 10 boxes full of eggs to see if this shiny shines.

Leader Type: Flying
Challenger: Dunkelosteus
Team used against Leader: Bronzong, Tyranitar, Thundurus, Entei, Espeon, Mienshao
Challenger Result: Loss 0-2
Rate your performance: 8/10
Rate opponent's performance: 7/10
Comments about the match: A better performance on both our parts, she had a better answer to one of her main problems but fell prey to my other pokemon. Shes getting better, thats for certain.
Last edited: Jul 13, 2015

will attempt to open tommorow. Currently dealing with stuff (Dad getting married, closing on a house on thursday etc) 1.) Shiny flawless Adamant Tyrogue with hi jump kick and counter
Winner of this prize will contact Fairywitch to claim their prize.


2.) Shiny 5IV Virizion
Winner of this prize will contact Cryuel to claim their prize.


3.) 5IV Timid Frisk Noibat in a Dusk ball
Winner of this prize will contact TwinYoshi to claim their prize.​

Winners will be announced the Monday after prizes are announced,
so earn Badges & Symbols throughout the week & weekend!
Prizes should be claimed sooner rather than later and
will go back into the pot if not claimed until the next Raffle Winner announcement unless otherwise arranged.

I also like to note my shiny tyrogue can be nicknamed too to let everyone know ^_^ still in my other game owned to me also sorry for not opening once again been a bit busy but I did ask cutty to train with a few other leaders to start his apprenticeship to open the fairy gym up more for a bit.

Leader Type: Flying
Challenger: Burner
Team used against Leader: Mamoswine, Raikou, Excadrill, Clefable, Chansey, one other I forget.
Challenger Result: win 3-0
Rate your performance: 6/10
Rate opponent's performance: 8/10
Comments about the match: Made a lot of crucial mistakes that cost me a mon early, plus some surprising speed losses kicked me in the bum. Gg nonetheless.

Leader Type: Flying
Challenger: Auracaster
Team used against Leader: Delphox, Lucario, Lopunny, Crobat, Gogoat, Luxray
Challenger Result: loss 4-0
Rate your performance: 8/10
Rate opponent's performance: 6/10
Comments about the match: I don't think you anticipated my lead, and to be honest you kept using a move that wasn't very effective on it. Had you done a few different things it may have ended differently, but my lead certainly gave you issues.

Leader Type: Flying
Challenger: NSG Grimgamer
Team used against Leader: Blastoise, Charizard, Aggron, Gengar, Gardevoir, Flygon
Challenger Result: loss 5-0
Rate your performance:8/10
Rate opponent's performance: 5/10
Comments about the match: I don't want this to sound mean, but it doesn't seem like your team is built for competitive battling. If thats the case you are going to have a bit of a hard time in the league, especially since the pokemon we use are built for competition.
Last edited: Jul 16, 2015

Fighting gym is open o/ PM to challenge. I'll get the request in my email

;448;Do You Think You're Ready to Stand Above the Rest?;448;​
Join the TEF League!​
Find fierce Gym battles, a Battle Frontier, Poke Raffles,
Tournaments, Contest and More right HERE on the league spreadsheet!​
L

Steel gym should be open Friday depending on my schedule and if my friend is back with my team tomorrow, as he should, so I can properly test the new team I'm working on.
FC: 1049-2782-0405
IGN: Lynx 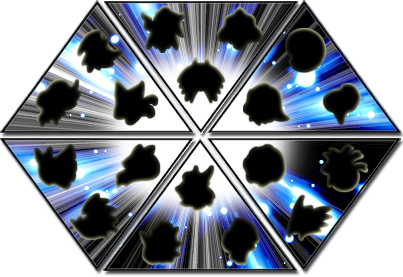 Leader Type: Fire
Challenger: Burnerv2
Team used against Leader: Starmie, Togekiss, Mismagius, Conkeldurr, Heracross, Charizard
Challenger Result: loss 1-0
Rate your performance: 8/10
Rate opponent's performance: 8/10
Comments about the match: your a great battler but your mon choice has started to become a bit predictable so I generally know whats coming so I would like to see some new mons/sets from you of course its up to you lol, GG! WP! looking forward to the rematch
Last edited: Jul 16, 2015
"Now we must duel like two gleaming banjos on a moonlit stoop!"
FC: 1306-6191-8985
;479-c;
D

Challenger's Name: LynxForte
Leader Type & Owner: Normal / DJSummers
Team used against Triad/Facility: Runic Triad / Thundurus, Sylveon, Skarmory, Empoleon, Serperior, Lopunny
Challenger Result: Loss 0 - 1
Rate your performance: 8/10
Rate opponent's performance: 8/10
Comments about the match: Very close match, the hax was not trying to let me do much, but I was able to hold off and get the win.

DJSummers said:
Challenger's Name: LynxForte
Leader Type & Owner: Normal / DJSummers
Team used against Triad/Facility: Runic Triad / Thundurus, Sylveon, Skarmory, Empoleon, Serperior, Lopunny
Challenger Result: Loss 0 - 1
Rate your performance: 8/10
Rate opponent's performance: 8/10
Comments about the match: Very close match, the hax was not trying to let me do much, but I was able to hold off and get the win.
Click to expand...