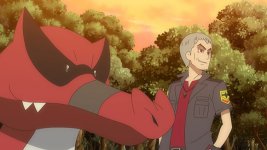 Wanting to continue his Island Trial Challenge, Ash has come to Ula'ula Island in order to face the Kahuna, Nanu. However, Nanu has avoided him so Acerola helps Ash track Nanu down, but Nanu refuses his challenge. Acerola decides to convince Nanu to let Ash battle him to show he's ready. Will Ash be able to prove his worth?

So Kaiwe is going to compete in the Pokemon league?

p96822 said:
So Kaiwe is going to compete in the Pokemon league?
Click to expand...

p96822 said:
So Kaiwe is going to compete in the Pokemon league?
Click to expand...

What kind of league format there is going to be though which will make Kiawe to be able to participate? I mean he has only two Pokemon (three if we count Charizard) and I cannot imagine a league which lacks full battles.

I liked that some of the lore behind Ultra Necrozma, Solgaleo and Lunala was included but I wished they went a bit more in depth with it and it could foreshadow a future event in this series given Poipole's surprised reaction to it. It was kinda good to see Lycanroc get berserk after a long time even with a flashback but unfortunately resulted in its downfall against Nanu.

Well I guess Kiawe will probably be one of the early round participants used as fodder for Ash, like Barry and Trevor. So he may not need more than three Pokémon if he's going to lose early.

Darthlord7 said:
What kind of league format there is going to be though which will make Kiawe to be able to participate? I mean he has only two Pokemon (three if we count Charizard) and I cannot imagine a league which lacks full battles.
Click to expand...

They gave Alan a full team of 6 out of ass, so if they want to put Kiawe in the league, they will do it.

Finally, a Grand Trial that Ash doesn't steamroll through on his first attempt, since I did have concerns he was being too OP in regards to clearing the Trials/Grand Trials. I knew that having to try and beat Nanu's whole team with just one Pokemon was tough, but at least Lycanroc going out of control was the reason for Ash failing, so hopefully we get an actual training session which has been extremely lacking in SM so far, especially with anger management classes for Lycanroc.

Also, Kiawe hinted he's going to participate in the Alola League? I thought someone was going to shoot down the idea of any of the classmates participating since they don't have full teams.
Tumblr | Instagram​

Xeogran said:
They gave Alan a full team of 6 out of ass, so if they want to put Kiawe in the league, they will do it.
Click to expand...

The thing is that Alain wasn't part of the XY group though and wasn't around all the time so we could assume that he has more Pokemon than just Metagross and Charizard. This doesn't apply with Kiawe.

Staff member
Moderator
This episode perfectly encapsulated what owning a ton of cats is like, and that's beautiful.

Oh, and Necrozma got mentioned. Yay.

Now with Kukui officially revealing that there's going to be a league to everyone and the Ultra Necrozma foreshadowing, I'm expecting the series to really pick up the pace now (since Ash would have finished his third grand trial anyway in a couple of episodes). I personally feel we'll be seeing Ultra Necrozma by August.

Nanu definitely seems different from his 'not giving a s***' games self, as he seems to show a lot more emotion in the anime, but I don't think that's a bad thing. Both Nanu and Acerola have been pretty good characters so far, and I really wish Acerola was the one travelling with Ash instead of his current bunch of horrendous classmates.

This episode was pretty decent, though unfortunately, like majority of SM, the battle kind of sucked. As expected, Lycanroc's stupid rage proves to be its undoing, though I was impressed at how unfazed Krookodile was. I'm atleast happy that they're going to train to overcome it next week.


Xeogran said:
They gave Alan a full team of 6 out of ass, so if they want to put Kiawe in the league, they will do it.
Click to expand...

Yeah but Alain wasn't a primary companion or anything, so they could always give him a full team. Kiawe is one of the six primary characters, so it'll be super odd to see him pull out 3 Pokémon out of his ass. If they intend for him to reach the 6 vs 6 rounds, they need to have him capture 3 more Pokémon onscreen, which I'm doubtful off. That's why I think he'll be like Trevor, whereby he'll lose in the early 3 vs 3 rounds.

On another note, this episode made me lowkey ship Acerola x Ash
They're so cute and it seems he started living at her house for the time being.

Akkipeddi said:
As expected, Lycanroc's stupid rage proves to be its undoing,
Click to expand...

They were clearly losing even before that though, Nanu was toying with Ash the whole time. He's probably the most savage "gym leader" we've ever had, not in a straight up antagonistic way like Surge but in that he just doesn't care about challengers, rather than being bored by a weak opponent he seemed to somewhat enjoy toying with Ash and then just told him to get lost, this is the kind of guy you WANT to see Ash overcome and it's so strange that we don't have characters like him more often, at least it feels like a true treat whenever we do.
My webcomic, "Dandelion": http://rohancomics.com/ (my avatar is the main character)

My other art: http://rohanite.deviantart.com/gallery/
N

Its even possible we have a different concept league than the others, with the first round being a double battle and then Ash fights Kiawe in the first round (Then they don't have to give Kiawe a third mon) and then second round start with 3v3 battles.
My Friend Code: 4098-4422-2793 Add me.
P

Well this was certainly an eventful episode. Looks like they are following up on Nanu having some kind of deal going on with Giovanni, though I wonder just what it is. Nanu in the games was willing to let criminals off provided they stayed away from law-abiding people, kept themselves holed up in their own place, etc. Perhaps Giovanni is threatening him with something?
The defender of all things Pokemon!

OK-goodish episode. This one and last one redeemed that horrible 1 hour special.Honestly if they continue making episodes like this one and last one( so good, not great, amazing or perfect, just good);SM would be better than Johto and maybe Kanto.

So they are going for an Ash and TR solo arc here. While this isn't a great time to put the other companions on hiatus, the dynamic with only Ash interacting with the new characters and environments made it a rather memorable episode.

I'm interested by the conversations going between Nanu, Giovanni and the TRio, wonder what they're setting up. I was disappointed we didn't see Jessie attempting Mimikium Z, hopefully next episode. Loved that super evil huddle the whole TR gang have though, even the Pokemon.

Liked all the Pokemon interactions, Poipole being a nuisance again, the Alolan Meowth being unruly and cat-like (though there was at least a couple friendly ones in the bunch) and Torracat lounging around. They definitely aren't neglecting the personalities of Ash's team this series.

Nanu comes off as a more unique dynamic for a Kahuna, not antagonistic and mean outright like some of the Kanto gym leaders, but he seems to really not have interest in doing his job. Acerola seemingly goading Nanu into doing a battle was funny, see she has the helpful, mischievous little sister role with Ash, with Pikachu even protecting her from some loose projectile during the battle.

The loss is hit and miss, while Ash loses more due to a folly by his Pokemon again, it was more frustration from Lycanroc getting owned to begin with. Ash's emotional but contained reaction was a nice touch, while still being empathetic to Lycanroc after it wallows in guilt afterwards.

League confirmed, and Kiawe looks set to join. I'm actually hoping he gets a good use in the league. While he only has two Pokemon at the moment, I suppose he has plenty reserves at the farm if worst comes to worst, though I'm starting to wonder if SM is gonna be going on longer than expected.
Last edited: May 10, 2018
P

Also, while the anime often doesn't take into account the less obvious type resistances, if they did then this was going to be a bad matchup for Lycanroc even without the rage issue. That is it can't hit Krookodile for even normal damage with anything except Tackle (Krookodile resists Bite, Rock Throw and Accelerock), and of course it itself is weak to Ground.
The defender of all things Pokemon!
You must log in or register to reply here.
Share:
Facebook Twitter Reddit Pinterest Tumblr WhatsApp Email Share Link
Top