Unto the Sand[OU Sand featuring Landorus]

Hello everyone! I'm CedOmega, bringing to you all a new OU RMT from myself ofcourse. I did have a very detailed, very thought out RMT to begin with, but the server "timed out" and I was unable to post it...so this is the second attempt. That said, the team is focused around making Landorus stand out. It was dedicated to Sand soon after its creation due to the helpful recoil Pokemon nonresistant take. Landorus captivated my fascination after an old team revamp inspired me to use its Sheer Force ability Incarnate form. 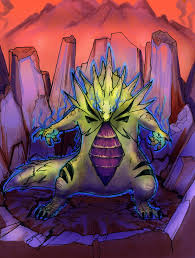 Tyranitar is the team's weather inducer. Not only does he commonly serve as the team's lead, he serves as the teams sleep and death fodder should the opposing team not have a weather inducers. Stone Edge is for immediate power, Crunch helps against Psychic and Ghost types, & Fire Blast serves as a check to common threats like Scizor & Ferrothorn. Obviously, Tyranitar's Stealth Rock makes him the team's setter. Landorus is the star of the team and therefore is centered as the main attacker. Pretty much everything done in the battle is to see his way onto the field, if the extra support is needed. With Life Orb + STAB, Landorus' Earth Power is simply monstrous. Having Hidden Power(Ice) grants him coverage against opposing Dragons and Flying types like Thundurus-T, Gliscor, Dragonite(After SR), Salamence & Grachomp. Focus Miss Blast is the most frustrating move to use, however, when not acting completely incompetent, it does its job effectively. Its spread is custom made to add bulk, leaving room for the abuse of HP(Ice) while taking recoil, and and giving Landorus the speed he needs to have ensuing a single Rock Polish. 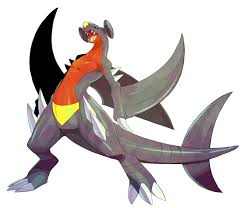 Garchomp is the team's go-to guy for most Dragons that Landorus cannot come in on. Since Scarfed Latios has once again become a fad, Jirachi was added to cover its weakness in being outpaced by him. Having Jirachi by his side, Garchomp also fears very little Ice attacks, including Ice Shard from Mamoswine and Donphan, since I am often good at getting a double switch in such as Garchomp>Jirachi>Rotom-W. Outrage & Earthquake are a great pair, while Fire Fang is also an added coverage move. Dragon Claw was added after the need for Stone Edge was no longer up to par with the Volcarona counter method. Instead, I desired to not be stuck in an Outrage-lock against Steel types, which resulted in the addition of Dragon Claw.

Rotom-W was originally added for "Lols" but has since proved itself to be of use on the team. Rotom-W brings the team a source of burn to cripple Breloom & other physical threats with Will-o-Wisp. The reason for running max Sp.Attack and a Modest nature is to hit as hard as possible and max Hp is to at least sustain some bulk as an attacker. Hydro Pump handle everything a rain team has to offer, while Volt Switch allows me scouting ability and also a good KO switch on some opposing Pokémon. Coupled with Jirachi's Wish pass, this set functions very effectively. 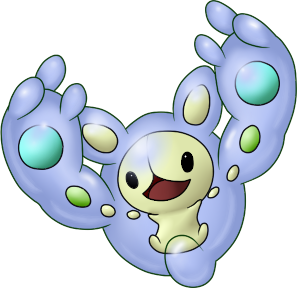 Reuniclus made the cut as the final member after I reviewed old team revamps from my Smogon profile. Reuniclus is one of the most annoyingly deadly Pokémon to deal with on the team. That said, Reuniclus is the team's status & Leech Seed absorber. In fact, with Ferrothorn being so prevelent, Reuniclus finds many opportunities to come in against all variants of Ferrothorn and set up Trick Room and follow through with an all out assault. After setting up Trick Room can tear through the opponent's team with Psyshock, Shadow Ball, & Focus Blast. Hidden Powe(Fire) is only optional if Scizor and Jirachi begin to become annoyances to the team overall.

In closing, this RMT is of no comparison to my first typing. Sadly, it was lost, but at least I get to oresent the team. I hope everyone enjoyed reading my run around second version. Haha. All suggestions will be taken into account and considered for the overall to team. Happy rating!​
Last edited: Apr 23, 2013
​
When in doubt, fight harder...Never accept defeat as temporary satisfaction...

Feel the Heat
Check out my latest RMT
K

I might suggest using SpD Support tar over your current one, with a moveset of pursuit/stealth rock/ fire blast(or ice beam)/ crunch(or other filler move of choice). it'll help more with luring in threats, and is, in my opinion, more effective. fire blast helps it ko ferrothorn, which i think your current set only 2hkoes with superpower, but i could be wrong. regardless, it also helps against scizor, who can easily grab momentum and u-turn into something more threatening. stealth rock helps relieve pressure off of jirachi, who seems to be doing a lot.

with stealth rock gone, you can now try either fire punch or ice punch on jirachi. ice punch helps against things like rp landy, in checking it, while fire punch deters stuff such as ferro and scizor. again, who hurt your team. or, a third option, you can use u-turn, to help better gain momentum, and it helps with wish passing a lot. its all up to you, and what you feel threatens you the most.

i might also suggest at least trying out the trick room reuni set. in a fast paced meta such as this, trick room is a big middle finger to the opponent. and with workable defenses, and recover, your coverage can do fine. again, just remember to remove ferro and scizor.

i see a lot of things threatening this team. hazards, though not too big a deal, still hurt and do passive damage. and against a good opponent, you could possibly lose the weather war due to them.

mamoswine is a baddie as well, though has limited opportunities to switch in.

also, not much of your team can take rain boosted hydro pumps. thats a fairly bad thing. with rotom's slow-ish speed, its not going to be taking too many hits.

just some things to think about, feel free to respond with how you deal with these(rain and hazards).

Haha. Thanks for the feedback and suggestions, That Crazy Russian™.

I'll test the T-Tar changes but I've always been sorta sceptical of how Fire Blast deals with Scizor when it is outspeed either way and OHKO/(Maybe 2HKO)'ed by its U-Turn or Bullet Punch. Still, it's worth a test, so thanks. The spread for this is Sassy nature with 252 Hp/ 56 Sp.Attack/ 196 Sp.Defense, if I'm not mistaken?

Fire Punch seems like an interesting option for Jirachi. Will definitely test it out. That said, I used to have U-Turn over Stealth Rock but the lack of support was overbearing at times. If I like the Tyranitar change, I'll go back to U-Turn more than likely. Thanks again for the suggestion.

Now, with Trick Room Reuniclus, there lies a problem. My current Reuniclus utilizes its bulk to set up as many Calm Mind as possible before having to attack. While I'm currently testing out Focus Blast over Shadow Ball, it will be vulnerable to more physical attacks with that change. Since Bold CM is unpredicted most of the time, I think I'll stick with until it proves otherwise. But I will test it under such circumstances. Thanks for the suggestion.

As far as hazards go, I make it my best effort to see to it that the opponent finds little opportunity to set up anything(Hazards, boosts, statuses, etc.). Stealth Rock is okay for me. Add a single layer of Spikes is sorta normal for the people I battle with. Add to this another layer to this and the game gets a bit interesting for me. Wish, coupled with some accurate prediction, also plays a significant role in this, as it covers most damage taken from hazards.

Mamoswine threats have to worry about Rotom-W overall, because I often go for the burn first and Hydro Pump second, due to Endeavor+Ice Shard Mamoswine being a bit popular. Since the common Mamoswine usually lack Stone Edge or, if they run it, try and KO Rotom-W with Superpower, I am able to handle them fairly easily.

Rain teams are a moderate concern because Tyranitar is slow enough to set weather last most of the time. Hydro Pump is not much a threat due to Rotom-W's being able to Pain Split most damage taken on a predicted Hydro Pump. If the damage taken isn't too heavy, I am often able to Volt Switch the following turn to Garchomp, if suspected to be Scarfed Politoed.

For rain teams in general, I'm considering changing Volt Switch to Thunderbolt. The loss of scouting potential may be significantly missed, however. Any thoughts on that?
​
When in doubt, fight harder...Never accept defeat as temporary satisfaction...

Feel the Heat
Check out my latest RMT
K

well, for fb on ttar, its used to lure in checks and stuff, such as ferro and scizor in fb's case, or gliscor in ice beam's case. obviously, youd nail it on a predicted switch

as for volt switch<thunderbolt, i'd end up going volt switch, for the momentum. i dont believe thunderbolt ohkoes politoed, and volt switch allows you to grab needed momentum

Tested the Tyranitar & Jirachi change. Though I didn't encounter a Scizor or I did come across a Venusaur where Fire Blast proved useful.

U-Turn totally came in handy on Jirachi. Was versing a Heatran and lets just say it didn't enjoy having Jirachi fire off a Wish and then U-Turn on its switch in turn. Haha. Epic. Thanks for the suggestions That Crazy Russian™!

*General Team Change*
I'm making a temporary change to Rotom-W. The EVs for me are a bit unneeded for my battle style.
​
When in doubt, fight harder...Never accept defeat as temporary satisfaction...

Feel the Heat
Check out my latest RMT

I would also suggest trick room reuniclus cause it has an eaasier time sweeping and putting pressure on the opponent then cm with banded tyrannitar being common, and works better with landorus and scarfed garchomp as it can it doesnt try to sweep like cm, but inflict as much damage as it can, which can help weaken threats like celebi, latias, and the rare gyarados that try to stop landorus after a rock polish. It also provides a back up check to rp landorus t, which with earthquake, stone edge and hp ice can sweep fairly easily, easpecially if rotom is around 40%

The team atm looks like it can have trouble getting rid of celebi as it can baton pass out of tar, and just switch out of jirachi. I would consider pursuit on tyrannitar so you can trap threats like latios and latias, tho rachi can wear them down, it puts a lot of pressure on jirachi to absorb a lot of hits, plus they can keep coming in and cause a lot of damage

Give rotom pain split>thunderbolt for longetivity

Overall, the biggest thing is TR reuniclus as it patches holes and problem pokemon like rp lando t, lando i, mamoswine (superpower 2hkos rotom wash), keldeo, terrakion, and make it easier for lando or scarfed garchomp to sweep

Added the changes to Reuniclus. As a member of the team, he wasn't seeing never much use. Also, Trick Room helps in late game sweeping and handling faster opponents.

Added Pain Split to Rotom-W as a source of recovery. Plus, Rotom-W sorta missed having the annoyance factor anyway.

Thanks to That Crazy Russian & mcdanger for the help. Open to more suggestions.
​
When in doubt, fight harder...Never accept defeat as temporary satisfaction...

Feel the Heat
Check out my latest RMT
C