Okay, so I might've done something to make the mods(Wolfey) hate me, so now I'm banned from there for who knows how long. In boredom, I thought I might as well talk about the team I'm using for the Wi-fi tourney in March. Before we begin with this RMT, I would like to thank Ben7000, a regular player on the Skarmbliss PO ladder, for helping this team come into existence. Please note that all pokemon in this team with a Speed-lowering nature have the minimum IVs in speed.

Being a physical tank, a generally slow pokemon, and the only weather starter with a reliable form of recovery that doesn't involve Sleep status, Hippowdon was a must have for this team. The EV spread allows him to be as bulky as possible w/o giving up any offensive grit. EQ gives him a solid STAB to use while Crunch lets him hit Cresselia for SE damage. Ice Fang is there for coverage against everybody's favorite Sand Veil abuser: Cacturne...Just kidding! Garchomp! With how much punishment that Hippowdon takes and the fact that he's going to be working under TR often, it was a better idea to give him Slack Off over Protect. I wanted to use TTar, but with Fighting types that work well under TR and Metagross Steel types being so popular, adding TTar was a generally bad idea. The Trick Room setter and literal damage sponge of the team. Thanks to Rest, Cresselia can wall attacks much longer than usual, and with the Chesto Berry, he can set up TR w/o a hitch or take her time killing off Amoonguss. Psychic and Ice Beam along with the Sp. Atk EVs let her give offensive support by damaging Fighting types and Dragons. 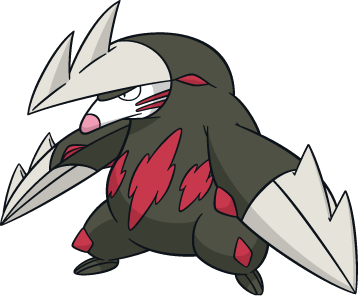 A sweeper in the sands in case things I just need to be sneaky with Sandstorm and Trick Room. Excadrill sweeps the rest of the opponent's team on the off chance that they stall out Trick Room. Earthquake and Rock Slide are its moves of choice. X-Scissor allows it to hit pokemon like Ludicolo and Cresselia for SE damage. The all-too-common Intimidate support of the group. Thanks to the Fight Gem, Hitmontop can 0HKO Max HP Chople Tyranitar so long as no other Intimidators butt in. Fake Out is there if I need to set up TR again with Cress. Wide Guard covers against the team's sensitivity to Heat Wave and Surf while giving Hitmontop some sort of protection against the team's own Earthquakes. Sucker Punch lets me pick off weakened pokemon.

My chief Trick Room sweeper and the only pokemon that can claim to be able to 0HKO Cresselia w/o Crit hax or outside support. Bug Gem + Megahorn let him do just that and maim anyone that tries to switch into it. Iron Head gives him a more reliable STAB to use if he can't waste the Gem for some reason. With Escavalier's movepool being more shallow than your typical person's tolerance for ignorance and trolling, I had to give him Substitute so he isn't crippled by burn all the time. 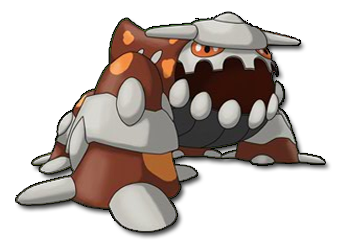 Well, well, well. If it isn't the Heatran from Oblivia w/ Eruption. The Quiet nature would normally be considered a terrible thing, but thanks to it, he's actually pretty good under TR. Eruption is the STAB of choice that imminently rapes the opposing side thanks to the Fire Gem. Earth Power and HP Ice give him much-needed coverage.​

I hope this team does well in the upcoming tournament. Please rate and give your opinions.
S

I can see some bulky waters and Aqua Jet threats stepping on your toes. Although not as common, Azumarill can cause a bit of damage by avoiding your Trick Room mechanics with Aqua Jet and scoring some terrifying damage against 50% of your team. Of course, you do have Escavalier, Hitmontop and Cresselia who can take a hit and dish out on Azumarill as well.

Offensive Jellicent are also going to give you some headaches. I don't really see strong stable counters to it tbh, barring Hippowdon who won't want to eat Hydro Pump. I guess Hitmontop can outpredict it with Sucker Punch, but a misprediction means you're eating WoW.

I'm actually personally running a strange Azumarill as a counter for a team similar to yours. Because of it's own naturally low speed with a negative nature, I find great success in using Waterfall instead. That said, you can find your own trick room playing against your own common weakness. Add that azumarill has mild bulk to play with, countering it isn't a 100% sure thing. Granted, I'm struggling to make this Azumarill work anywhere else (it's pretty much on the sidelines unless a team looks like it's trick room).

But don't allow this to detour you. You can counter it with what you have. Just mark it for death the second you see anything ressembling a water type threat and you are good

Be sure to follow up on StriatonRadio. Get a laugh while we all talk Pokemon! Links to podcast are on the page! Note that StriatonRadio is currently looking for suggestions and feedback!
P