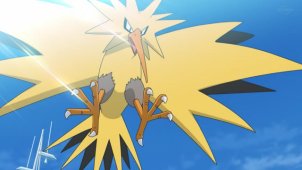 A huge thunderstorm hits Sakuragi Lab as Ash & Goh are relaxing. As they soon detect energy, they realise the Legendary Pokémon Zapdos may be the cause of it. As power blackouts start to happen, Goh thinks he knows where Zapdos is. When they go there, they encounter Zapdos and immediately challenge it to a battle. However, after not being able to win, they decide to have a Raid Battle against it with Team Rocket. Will they defeat Zapdos?

What moves that Zapdos, Rhydon and Stunfisk where using?
U

Did Zapdos get caught?

Okay, really annoyed that apparently Ash forgot Electric-type moves don't affect Rhydon or Stunfisk when fighting Team Rocket. Even more annoyed that they didn't show how he ended up actually beating them...

But on the upside, Zapdos wasn't caught. In fact, it was merely there to provide electricity to the Electric-type Pokémon. Oh, and Raboot learned Blaze Kick.
I OFFICIALLY SHIP ASH KETCHUM WITH MIRAJANE STRAUSS FROM FAIRY TAIL!

No one caught Zapdos

...well so much for that lmao. Guess the ‘main chars don’t catch Legendaries’ trend is gonna continue for a while longer.

Disappointing, should've been Raboot's evolution at least. But there you go people Ash might get a legendary Pokemon first.


Blaze Master X said:
Goh almost caught Zapdos, but it broke out Pokeball and flew away. lol
Click to expand...

Correction, Zapdos cheated and literally destroyed the poke ball to free itself by somehow controlling the weather from inside the Poke ball.
Youtube Channel: https://www.youtube.com/channel/UCIVifm39zQmjiKXviwVdSiQ/videos
Favorite Pokemon (Up to 8th gen): Favorite Pokemon

dman_dustin said:
Disappointing, should've been Raboot's evolution at least. But there you go people Ash might get a legendary Pokemon first.
Click to expand...

if he ever gets one.

RLC said:
Not gonna lie it got me there for a sec especially with the music and all in the background lol
Click to expand...

I thought the same thing, but I guess Zapdos thought ahead by calling down lightning to break itself out.

Also, this is one of the few episodes where Gou didn't capture anything so there's that, though Raboot gained a new move, and it being Blaze Kick is neat, and at least maybe now Gou will realize that you can not underestimate his targets, especially seeing as how he didn't like seeing his pokemon get hurt so badly.

I do gotta admit though, for all the hype about the "raid" battle, it sure didn't last very long, and of course TR turned on them to try and get Pikachu, but apparently it wrecked them off screen.

I do wonder what water attack that stunfisk was using.
U

As expected, Zapdos escaped. No surprise there, legends typically are only caught if they allow it.

ibelinssj said:
Zapdos entering his pokeball but escape on the last moment after he thought it is safely caught will serve like Ash losses against Octillery and Tentacruel.

I like this episode, my hope is partially fulfilled. Zapdos escape after almost being captured and Goh got something to consider (I need the sub to be more accurate).

Though Goh do not sulk that much, at least he seems to learn that sometimes letting pokemon go away, especially legendary, is for the best as they play a good role in the wild instead of caged in lab.

ibelinssj said:
Though Goh do not sulk that much, at least he seems to learn that sometimes letting pokemon go away, especially legendary, is for the best as they play a good role in the wild instead caged in lab.
Click to expand...

he did show some signs of concern that he might fail, but it turned more towards concern over Raboot getting hurt in the end
K

I've never been so relieved to see a Pokemon NOT get caught in an episode, holy ****.

Almighty Zard said:
he did show some signs of concern that he might fail, but it turned more towards concern over Raboot getting hurt in the end
Click to expand...

I mean the part where he saw Zapdos give energy to electric pokemon.

Did he have quarrel with Ash regarding catching legendary vs not in early part?

So Blaze Kick, took long enough tbh to get a 4th move. Meh episode tbh. 7/10
Eevee is the best

So all that worrying over nothing lol