What did you name yourself in Pokemon games?

King of the flames

I have always names myself Red or Yellow. I would like to know what you names yourself.

Credit to Astral Shadow for the AMAZING banner!​
B

Blaze, because that's exactly what my name is.

I usually use my real name. I'm too uncreative to come up with any others. 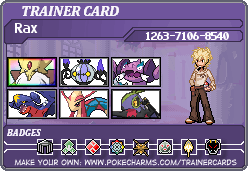 It used to be just my name, but now when new Pokemon games come out or I replay old ones, I name them after other video game characters. For example: I named Serena after Sheena Fujibayashi from Tales of Symphonia, and I named May in Omega Ruby Estelle, after Estellise Sidos Heurassein from Tales of Vesperia. Actually, I've named a lot of my pokemon MCs after Estelle. Hilda, Lyra, Rosa, May, Dawn... I guess Estelle's just really popular now.

I name myself after myself, I can't think up of any other names ;P Plus I want to feel like I'm in the game.
​

I named myself Psychic in Yellow, my first Pokemon game, and have mostly been calling myself that since. That was also the inspiration for my Serebii username, as you may have guessed.

I generally use either Lost or my IRL name.

I used to use my real name but I didn't really liked it.
Started going by Leaf, then Zelda, Raven, Kalyx, Kalex, Luna, Archealis and finally decided Armada even though once in a while when I delete a file I go by Leaf because its the name I like XP and pretty much the one I got used to when playing since Firered. I guess mostly because the protagonist was Leaf. >.<

Fire and Lightning Race Across the Heavens​
K

My trainer names vary a lot. I usually try to come up with a name that I like before starting a game, but sometimes I don't and then it will just be some random name. I don't use my real name since I don't like it, I used it twice in Gen 2 but then never again. Starting from Gen 4, I have used a different name in every game in order to make it easier to see which of my games a Pokemon originated from. Not going to list the names I used for Gen 1-3 because I don't remember all of them, and some of the ones I do remember are rather embarassing. But I can list the ones used on newer games. From Gen 4 and on, my trainer names while playing as the Male characters have been 16yl, Nathan, Fergus, Foxbert, Snacko, Gray and Law. For the Female characters, it has been Lina, Bon Bon, Tally, Xentih and Twilight.

No war but class war

Max, my real life name. Well, Maxwell actually but I can't stand that, most people call me Max anyways.
"Only when the last tree has been cut down, the last fish caught, the last stream poisoned, will we realize we cannot eat money."

I usually use a range of names, Zuzu (After ZuZunZyongZunZhang, My fish. Don't ask how I made up that name o.e) Chronus, Keladria, Silmiss, or sometimes my real name. Sometimes I feel weird and name it something random that comes to head.
W

I give myself serveral names. Sometimes my real-life name or slightly based on it, sometimes something random. In X I'm Xandra, while in AS I'm Victoria.
;123; Claimed Scyther ;123;

Banner, Button and Profile Picture made by Astral Shadow. Thanks a lot ^^​
P

In X I am Actaeon. I was on a Greek mythology kick, and since all I knew about when I got it was that the legendary was a deer thing (I was trying to figure out final typing for starters, and apart from that didn't care too much) I just figured that I'd name myself after that guy....so yeah. Usually just pick a random name with no meaning (and never my real name).
Timezone: -8 GMT

6th gen pokedex was easy....i just transferred everything with pokemon bank in under an hour, but no decent post game so I was bored enough to organize all my boxes by national dex number...still have over 3.5 million and nothing to spend it on, wish i could buy BP

Usually some variation of Loki (Lokie, Lothor, Ludor), or sometimes Silver when I'm playing a boy (due to the boy's 'white hair' in Sapphire). When I saw how much space was left over in AS, I decided a full name, Ludor Mace (which I've used for stories/RPGs), would be quite fun. It is hilarious to have your Pokémon world parents calling you by your full name.
Blog: Problematic Paranormal Files
Twitter: @CleverKraken

I've cleaned out my follows list, if you think you should be able to post VMs and are not,
send me a PM, I may have deleted you on accident.​
D

Starting in gen 4 I tend to follow a naming convention that is chosen at the start of a generation. The first one is at a whim the latter ones are decided according to that theme.
Gen 4 was halo vehicles was really big into halo back then
Gen 5 was based on the Periodic table of elements or more explicitly the Noble Gases
gen 6 is based on Constellations used in modern astronomy
You may notice there is little correlation in these...
Dragons are my friend, Ice is my foe...
(Kyurem is an exception) dragonics rule

I just named myself "Ludo" (short version of my name) up until gen 3.... in gen 3 I experimented a lot XD I did a lot of different playthroughs and gave myself a different name each time.... the only ones I remember are May (which is the Ruby save file I still have to this day), Nessie ( my emerald game, I named her that because of the green outfit XDDDD) and.... I remember my name was Nina in one of my Fire Red playthroughs because of how hard I LOLed when an in-game trade gave me a Nidorina who had the exact same nickname as my Traiber XD

Then in Gen 4 I eventually calmed down and went back to either Ludo or Luann (fusion of my 2 names). In gen 5 I decided I'd stick with Ludo but now I'm leaning back towards Luann.... For me, it is mix between the "official" name for a playable or rival character from Pokemon (such as Michael from Pokemon XD) and names from various characters from video games. The one exception is in Platinum in which my character is called Tayuya after the character from Naruto.

I have claimed Drapion, Yo-Kai Watch 2: Fleshy Souls and Fiora from Xenoblade Chronicles.
A

Alex, as per my real name. Not because I'm uncreative, but because it's my pokemon adventure when I'm in it.