What If Your Characters Read Your Story?

Bit of a random thread idea, but how do you think your characters would react if they read your story? Seeing their exploits unfold? Their failings and successes? Learning your opinion on them? And so on and so forth.

Macro - See? I looked awesome when I threw myself off that building to escape that mob.
Anchor - You kidding me? You almost got yourself killed.
Macro - But I didn't.
Anchor - Only because I saved your ***.

Macro - wow, I really come across as an absolute tool at times... D=

DL - *covers face with embarrassment at her earlier chapters*

Matrix - *shrugs his shoulders and gets on with his game*

Widget - She's given me some awesome scenes in this story!

Annie - I don't get enough screen time!
Web - It's a novel, dear.
Annie - What's your point?
Waveform - *rolls his eyes*
A Fanfiction Author Who Dares to be Different
A glimmer of hope in a war-torn world - The End
The System Series Glitched / Switch (a tie-in one-shot)/System:Reboot
New entry to System coming sometime in 2019?? Hopefully! Watch this space!
I'm also on FFnet with the same username!

† I am a Christian, and not ashamed to admit it! Copy and paste this if you are too †

Wow, so many good thread ideas are popping up lately. Alright then!

Deli: Perry read this to me, and I kind of feel a little ashamed. There's too much mention about my body fat, I think. If I asked nicely, would the author be willing to cut that part out?
Perry: Just found this, Mom. Was someone spying on us or following Deli around? Can we get some hidden cameras so we can find out who this stalker is?
Perry's Mom: Don't be daft, Perry, of course not. The author just read a news article about it and based a story off of that. I'm grateful, although I'm very offended that they made me out to be such a nagging b***h. I'm not like that at all, you know!
Perry: Yeah, you keep telling yourself that.
Perry's Mom: What was that?!
Perry: Nothing!
My fics:
The Manifold Curiosity

There's no need for me to write out a scenario, I'd already get my ass kicked six ways to Sunday for Handle with Care alone. This old image says it all, really.

Haha, some unhappy characters in this thread. Not that that's surprising... people tend to fret over even photographs of themselves, thinking their expression is weird or their hair's a mess or whatever; seeing all your thoughts and actions laid out in detail would have to be worse.

Most of the characters would be pretty indifferent. Absol wouldn't care. Mewtwo is used to having stories told about him and enjoys his notoriety, so he wouldn't be more than a little amused. The minor characters might be a little troubled/creeped out to find that there was a fictionalized version of some portion of their lives floating around out there, but they generally wouldn't be too bothered by the actual content.

The protagonist would have mixed feelings. On the one hand, the story is clearly WRONG in that it doesn't portray the protagonist as being 100% right all of the time, which it clearly is, and sometimes it even makes them look like kind of a villain. That can't be right, because obviously they're the hero.

On the other hand, some heroes have kind of villainous tendencies or even started out as villains, and a lot of times those are the cooler ones, so it's not necessarily such a bad thing. And the story does have plenty of action and moments where it gets to be awesome and do cool stuff. And it's a whole story! About the protagonist! So while there are parts that are clearly WRONG or that just shouldn't have been in there, there are good parts, too. In the end it would probably settle on being cool with it but also protesting LOUDLY about the bad bits if anybody brought it up.

Nate would mostly just be mad that his pain and suffering were made into entertainment for other people. It's one thing to be convinced that God has it in for you and quite another to find out that actually there is someone out there orchestrating your shitty life, and they're a literal corporeal person and therefore very punchable. It would be a good time for me to make a change of address.

Jirarudan would probably show no reaction but declare that something was wrong. He wouldn't tell me what, and only smirk when I would ask.

Cyrus would just hate the idea about being written about at all because it indicates some degree of emotional attachment and would lecture me for about seven hours straight on it.
The world's greatest collector

as drawn by Yoru Ryu
Fancy Jirarudan too? Then you'll enjoy my fic Obsession! (Chapter 35 posted 30th November 2021!)
It's got its own TV Tropes page!
Check out some of my other fics!
Answering Machine, winner of Most Heartbreaking Scene 2013 and Best Fanfic Kumoricon 2019!
Heart Like A Stone, winner of Most Heartbreaking Fic and 3rd place Best Canon Character-Centric 2014!
Solar System, 4th place, Villainous Intent!
In Vino Veritas, Best Fanfic Kumoricon 2018!
The King In Exile, Best AU Kumoricon 2021!
​
F

I’m gonna go with one of my pieces in the Shipping section (if that’s allowed uhh), aka some poetry I wrote about Ukyo x Heroine from Amnesia. Yes, I just wrote that. Poetry about a fictional pairing. Umm

Ukyo: ahah, was I really that emo the whole time? It doesn’t really matter, I was just thinking over everything again... say, this piece is written better than what I would’ve done, I’m not that good at poetry at all... I’m so glad that that time of my life is over...
Banner by AmericanPi!!

This sounded so fun I almost immediately started to write it down... and then I realized it might not end so well.
I honestly think my characters would kill me for what I put them through.
FC: 5258-0856-5908 / USUM IGN: Marika
*
Oh, and I also write mediocre Pokemon fanfic with original plots, OC's and no shipping.
You definitely shouldn't check that out.
​

My characters would think they're idiots for not seeing things coming...then realize that I'm the one who created said events...yeah, I'm a bit cruel with my cast, but it's all for their own good!

EDIT: I won't be writing for this given the number of plot points in my story that would ruin any surprises in store for the readers. Keep that in the reviews, please! 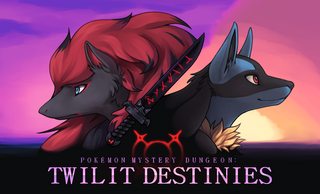 Two brothers--Arthus Zoroark and Matheus Lucario--grow in a region dominated by outlaws and gangs, each suffering losses in the dark world. Together, they rise up and vanquish the darkness, establishing a force for good in the region. All is well…until their inevitable fall from grace. The twilight is brightest before the sun sets…​
You must log in or register to reply here.
Share:
Facebook Twitter Reddit Pinterest Tumblr WhatsApp Email Share Link
Top