What're you currently doing in Pokemon?

What's your current Poké-activity? I'm Masuda-breeding my Italian Eevee with my British Ditto - six days, six boxes of Eevee, no luck - and waiting for some booster packs to arrive in the mail. I suspect that they'll arrive tomorrow, just as I leave - but I'll look forward to them when I get back. My last few booster pulls were underwhelming, to say the least, so I'm hoping for better luck this time.
E m i l i a​
platinum: 0989 8984 6979​
C

I'm just going to Join Avenue every day, and anxiously waiting for Gates to Infinity. :3

IV Breeding. And it suuuucks. But, learning RNGing is hard and it's taking a while to learn, so this is something to do in the meantime.
Take a moment, remind yourself
To take a moment and find yourself​

I'm just doing random crap, like the wifi trains, to pass away the time in White. :608:

Restarting my Black and Black 2 Versions so that I can do modified Nuzlocke playthroughs of each (in anticipation of Gen VI, of course).

Lord Zoroark;16227456 said:
Listen, you gotta remember these things; always avoid claims of Fennekin being (or becoming) part Fighting-type, don't tick off mods, and NEVER (and I mean NEVER!) suggest that Arceus is the God of Pokemon when Endolise is online. If you somehow make this mistake, run for the hills before he attempts to murder you via tongue lashing.
Click to expand...

I am in the middle of playing White and training my team of pokemon to battle for my 7th badge.
http://scarpine496.deviantart.com
http://www.furaffinity.net/user/scarpine496/

Do NOT call me by this username. I am Scarpine. I will be changing my username to Scarpine496 as soon as the opportunity arises. The above name holds bad memories so I appreciate it if people don't call me by it. Thank you.
C

In Emerald, I'm training for my 7th gym battle; in Platinum, I'm chasing the roaming legendaries around Sinnoh when I'm not shooting for a 100-win streak at the Battle Tower. In White, I'm not doing much of anything... I'll train something up until I get tired of it, then I run around Unova for a while, grab the item from the guy on Route 13 when I remember to.

I am currently breeding a Bold natured female Nidoran with its Dream World ability Hustle and 31 IVs in HP, Defense, and Special Defense for a friend of mine (in White 2). He bred me a Rotom in return, for which I will put into my 2013 International Challenge - March team. I definitely have the short end of the stick, as Nidoran are a pain to breed, due to them having 3 possible abilities, and turning out either male or female. xP

Other than that, I'm also practicing with the team on Pokemon Showdown, to get an idea of how the team works and such, so that when the tournament comes around, I'll have had a fair amount of practice. So excited for this tournament!

I also have been watching the anime, which is super cool, because the new season of the anime is probable the best yet, and they're finally at the Pokemon League. I've been watching a bunch of VGC streams as well, to get an idea of how the higher tiered players play, as well as to get some ideas. And finally, I've been gearing up for the next episode of my Pokemon-based podcast, hopefully to record sometime this weekend.

Huge thanks to Sweet May at the Lunar Subterrane Graphics​
U

Heart Gold Team: Not decided, will be a shiny hunting team.

I just restarted White so I could do a Psychic monotype. Right now I have Munna and Woobat on my team, and I'm up to Castelia City with two badges.

I'm also in the middle of a Flying monotype on Platinum that's kind of on hold right now, but hopefully I'll have some time to work on that over spring break.

And of course, I'm eagerly awaiting Gates to Infinity and X/Y. ; )
Latest shiny:

I'm currently SR-ing for Volcarona at Relic Castle.After I get done,I will train my Pokemon for their next gym battle.
3DS Friend Code: 1950 - 8194 -5373
Ghost Friend Safari with Phantump, Lampent, and Driftblim


Castform's Collection : My Shiny Pokemon : Youtube Channel
Thanks to ColtonL for the ORAS Special Demo code!
Thanks to Rayquaza The First,Wolf Prince,and 00swms of Forever & Again Art Shop for My Castform Banner and Castform Userbars!
Thanks to YaDunGoofed of Bizarre Bazaars for My Team Pose!
Thanks to Zek4040 of Sprite Workshop for my Ho-oh vs. Lugia Signature!

I've been completing pokestars studio films today on B2, and now i'm going to random encounter for shiny Skorupi on the outside of reversal mountain on B2 with my shiny charm again. I'm at 6,000+ with the shiny charm making me over the odds...maybe i'll get lucky though... *glares at regular Skorupi on the DS screen and sighs*

I am currently trying to hatch a shiny charmander, in platinum, using the masuda method, first time doing it though so I'm not really sure how long it's supposed to take before I think about quitting

Right now I'm working on my SoulSilver nuzlocke (which is in my sig). After that I'll finish my Platinum BQ and then I'll try and finish the National Dex. I've never put all my Pokemon in one game before so it should take a while to see how much of the National Dex I have.

Then I will hunt Shinies, do more nuzlockes, and EV train a team for the PWT and future games. That is until I can get Pokemon Y and start my adventure with Chespin.
Last edited: Mar 14, 2013 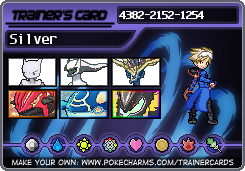 friend safari type: poison pokemon ariados, kakuna, and muk. please don't take too long too add me it drives me crazy and I will delete your friend code
T

I have a horrible habit of starting a game but not actually finishing it. Right now I'm working on Black version and Soul Silver. In SS, I'm grinding my pokes to beat the elite four, but in Black I'm sort of aimlessly wandering around wondering what I'm doing with my life o ~o