What's the most recent ship you've got into?

Pokemon Crystal is my happy place

Edelgard x Pretty much everyone else in the Black Eagles house, plus Claude. I think she goes well with pretty much all of them, in their own way. My favorites though, are El/Bernie, El/Dorothea, El/Claude and El/Linhardt :>
~A little princess in her own little dream world~
I like VMs! Feel free to chat whenever ​

Staff member
Moderator
Now that I've been watching One Piece, there are several ships I got into so I might as well leave them here.

Trafalgar Law/Luffy - I've always been a fan of Law from the second the he debuted, along with the rest of the Worst Generation and that only grew when he showed up at the end of the war to save Luffy and Jimbei from Akainu so it was only natural for me to ship them together. What else can I say?

Zoro/Sanji - what is there to say? I couldn't stop it, seeing as how they would always butt heads. 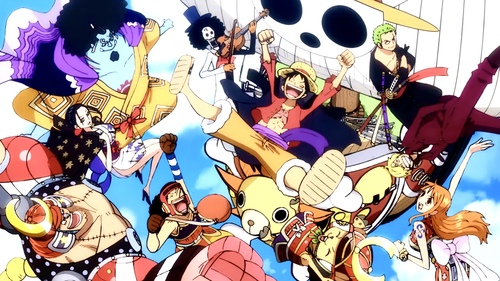 My favorite band of misfit pirates!​

Persona 5 (played vanilla and not royal yet), really wished to not pair Ren with anyone.
His first meeting with Ann though, he can't stop gazing at her for a while. Plus the music that played only once, at that scene only.
And while they have different personality, they are also both outsiders when they first met, IMO

And yes, there's also Makoto and Kasumi that has been pushed more, but still...