What 'bout My Star?

There is something to be said about a Pokemon's facial expression that can be summed up entirely as disgust. Sobble has disgust written all over him. I can't wait to judge absolutely everything with hin.

Colliepop;9761696 said:
And that is invalid!
Or maybe we reverse the positions. The lion can show up in the middle of a bustling city street, and take on a person in a tank.
Click to expand...

So I've updated Sobble's description in this thread. He's undoubtedly a Chameleon. Not only does he has the body features but he can turn invisible as portrayed by the trailer. Why did I updated it? An invisible water chameleon does sound far more interesting than simply a timid water-type lizard now does it?

If you missed it, here's the invisible Sobble.

I'm going to choose Scorbunny in Sword and Grookey in Shield.
My Teams

I think we have a sports team with the starters, just like the Alolan starters had a circus kind of theme.
Scorbunny is the Soccer..

If I had to rank which starters I liked best. It would have to be...

On a different note, the evolution I'm most curious of is Grookey's final evolved form. It looks like it will evolve straight into a gorilla to be honest but the thing is this isn't the first time an evolution seemed kind of "obvious" but surprised us anyway. It reminds me of Turtwig, how everyone thought it would just evolve into a bigger four-legged turtle but weren't expecting Torterra to look like an Ankylosaurus with a Tree on it's back. It's one of those evolution that just seems too obvious but you can't really fully make it out.
Last edited: Feb 27, 2019

For me it was love at first sight when I saw Scorbunny I love fire types and in mostly every Pokemon game the fire type starter is my first choice every time. I really hope that Scorbunny becomes fire/fairy or stays fire.

I feel like the starters are well-designed. I don't dislike any of them right now. Grookey is cute, and as someone said, a much better Pansage. Scorbunny is sweet and reminds me of a football player (no, not American football. I'm an American, but I call soccer by its proper name), those legs are meant for kicking. Sobble is adorable and I am heavily leaning towards it despite picking Fire the most often (I have picked every Fire starter at least once for a playthrough; Water is a very close second as the only one I haven't picked before is Squirtle).


shoz999 said:
And this kids is why we should appreciate Delphox a bit more.
Click to expand...

Yeah, at least Delphox isn't Fire/Fighting. I feel like I'm the only person who actually likes the Fennekin line.
#TeamLitten Well, I have returned. This is my new account (I used to be LegendaryTrainerLink).
50% of Serebii users are relapsing pokemon fans...if you are among those that never got off the band wagon...copy and paste this in your sig (started by CyberBlastoise).
My friend code: 1993-7207-3601. Please PM me BEFORE adding me so I can add you. 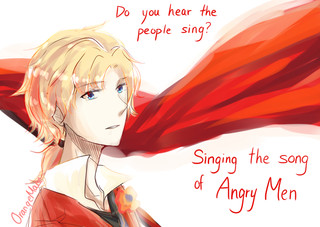 The fact that Sobble dissolves itself in water perfectly matches with Acid Armor, a Poison-type move. Would be extremely cool to have Water/Poison in its later stages, despite I just peaked in reaching.

disappointed they went with scorbunny rather then bunfire. Hopefully an evolved form will use bunfire.
Switch Friend Code: SW-1653-4607-0412
Favorite Pokemon:

WhiteBlair said:
The fact that Sobble dissolves itself in water perfectly matches with Acid Armor, a Poison-type move. Would be extremely cool to have Water/Poison in its later stages, despite I just peaked in reaching.

I feel like regardless of all their potential latest forms and types, I'll go with the most feminine one as usual lol.
Click to expand...

That's a good eye there! I never considered acid armor. It reminds me of Vaporeon actually.

I'm definitely curious where they go with their evolutions, but ultimately I don't think that they'll change how I feel about them.

Sobble is really cute. Here's hoping it has cool evolutions. Scorbunny doesn't even look like a pokemon to me. It seems like something out of an American cartoon.

I’m currently undecided on who I’m going for. At the moment I’m leaning towards Scorbunny but I’ll wait to see what their evolutions are like before I choose, similar to what I did with the Alola starters. Overall though I’m not as excited as I thought I would be with them. They just don’t appeal to me as much as past starters do.

Requiem Aeternam said:
I’m currently undecided on who I’m going for. At the moment I’m leaning towards Scorbunny but I’ll wait to see what their evolutions are like before I choose, similar to what I did with the Alola starters. Overall though I’m not as excited as I thought I would be with them. They just don’t appeal to me as much as past starters do.
Click to expand...

That's where I'm at now too. Leaning towards the water starter. Even their names aren't that memorable.

Not a fan of link trading.
R

They're cute, but I find them a little plain(?), I'd have to let them grow on me. However, it's ironic because I've been wishing for a water lizard starter for ages, but I'm a little underwhelmed on Sobble. Hopefully he'll grow on me as well. Currently I like Scorbunny the most, but I'm seriously hoping he won't be another Fighting starter. I sorta want it to end up as Fire/Fairy (I seriously doubt it though). Grookey is okay, nothing eye-catching to me though.

Also I've noticed that no one has suggested Electric for Scorbunny's final evolution? I see it as the most likely along with Fighting, or perhaps even Ground. For Grookey, I was thinking Rock or Dark (its apparently "mischievous"). For Sobble, Psychic or Ghost would be probable (or Poison I suppose), mostly as I've taken into account the fact that it has the ability to turn invisible. Maybe even Dragon, but I don't know if we'll ever see that for a starter (unless it is a Mega Evolution, hence Mega Sceptile and Mega Charizard X).
꽃피우리라 ♡
justice for soojin

I bloody love Scorbunny, and it's rare for me to favor a Fire starter.

I've only favored a Fire starter once before, and that was Torchic. Even then, I still prefer Mudkip. Scorbunny could be my first true Fire starter!