After having both 5D's and Arc-V start strong only to end up disappointing and zexal turn out just plain trash, I'm keeping my expectations in check.

Apparently Zexal S2 was great though. Idk though, I stopped religiously following Yugioh series after 5Ds and showed a casual interest in Zexal and ARC-V.

Mrs. Oreo said:
It seems like there isn't much enthusiasm for VRAINS in general. I dunno how it was when Arc V was announced, but VRAINS has received pretty lackluster support so far, tho perhaps that's cuz we didn't have much footage of this show until recently.
Click to expand...

The lack of footage is one reason. That and ARC-V really made fans lose hope in the upcoming replacement series, which looks iffy.

Wednesdayz said:
The lack of footage is one reason. That and ARC-V really made fans lose hope in the upcoming replacement series, which looks iffy.
Click to expand...

Arc V's troubles shouldn't deter people from looking forward to VRAINs however cuz Zexal was kind of bad as well and yet from what I've heard, viewers of that still seemed optimistic about Arc V when it began. So VRAINS deserves a chance.

Vrains deserves a chance, but I'm still playing it safe with this series. Hopefully there are no action cards in this season. We'll see. I'm just hoping for good decks again. I haven't loved dueling decks since the GX era.
Moon/Glovehead Berlitz! Make it a reality for a Berlitz reunion celebration!
E

Platinum fan. said:
Vrains deserves a chance, but I'm still playing it safe with this series. Hopefully there are no action cards in this season. We'll see. I'm just hoping for good decks again. I haven't loved dueling decks since the GX era.
Click to expand...

if you love a burn deck i think you will like one of the main character. and no action cards this time. by the way yusako voice sounds familiar to me who is it?
N

We have more VRAINS episode summaries. Episodes 2-5 in other words and also info on how the duels work, but that will be after the descriptions.

Yusaku managed to capture the mysterious lifeform as he chases after the Knights of Hanoi. In order to defeat them, he logs into the VR Space network, Link VRAINS, as Playmaker. He commenced a Duel, holding the lifeform as a hostage. However, the lifeform predicted that "Yusaku can't win with his deck", and performed a certain action...

Yusaku begins to examine the information hidden in the mysterious lifeform. Meanwhile, after his Duel against the Knights in the network, he became famous as the hero who saved Link VRAINS. Learning that the lifeform is with Playmaker, SOL Technology sets up an operation to capture it...

Episode 5 - The Bells Rings on the Count Of Three

Also according to a interview with the director there will be 2 duel formats, the Speed Duel format will used for the VR duels with a up and down format while there will be normal duels called Master Duels using the normal rules. I was right! I called it, I totally called it!!!
M

I'm glad that we'll see standard duels in VRAINS and not just speed duels, tho the fact that we'll have speed duels at all still kind of bothers me since I dislike that format given how it feels like the players use up the cards in their hands too quickly.

Staff member
Moderator
The episode 5 title is interesting, either there's a duel with Go Onizuka that extends to episode 5, or episode 5 is where Aoi/Blue Angel will debut.

I also find it interesting that VR duel will be in Speed Duel format, because of 2 things:

1. The shot of Yusaku entering VRAINS, involves him putting his deck into the disk, and it's a full size deck

2. Decode Talker's Link Marker may not work well in Speed Duel setting, depending on how they place the EMZ. How are they going to promote the card when its main gimmick (gain massive ATK through linked cards) is not at its full potential?
My shinies. *shows off XD*

It was ok, it gave us a lot of plot dump, as it should. Yusaku wasn't as much of an isolated guy as i thought since his isolation seem to be an act. Playmaker's hair is the silliest of all main protagonists. And he has a lot of competition for it

Second, the speed duels. So they saw the mechlord bad guys and decided they wanted that. Card games on hover-boards is just like ridding duels but without the burden of having bikes for everyone. I dislike the fact that most don't even have real world cards but hey, i use dueling network too. I'm excited to see how the link summoning will impact the quality of the duels. But besides the silliness of playmaker's hair and the silliness of the concept of speed duels, everything else seems in order. And no more plot convenient cards that aren't in the duelist's decks, thank god.

next, the plot (whatever small portion we got). I think this can become a good plot. I think yusaku's lost past and the fact that he knows how to speed duel makes him the savior of the world (again). those 5 things could be the companions of the main 5 characters, like the purple one is playmaker's. Interesting that there's 2 factions fighting for the cyverse, which seems like the source of the "wind" that disappeared. I think hanoi will be intermediate villains like dr. faker was and the new tech guys will be more of a threat, even though it looks the opposite right now.

finally some extra stuff. op and ed: pretty good, i like the ed in particular. Female characters: where are they? we saw 2 so far, the idol and the ninja. I hope if we don't have more, at least they get a thorough development. We all know that every strong female duelist was dropped at some point. and arc-V was the biggest offender.

I finished watching the first episode and I was disappointed cuz there was no duel, plus Yusaku seems much more serious than I expected. Ignis reminded me of Vector too, tho not evil ha ha.

Vrains... I don't have a strong enough opinion of it yet. First episode was okay. No duel for the first episode? That seems like a first unless Zexal didn't have a duel in the first episode. But at least they set up the duel. Characters have some interesting designs but will that make them interesting characters? I do think having the different personalities inside and out of the Vrains thingie is a interesting concept. I need to see more of the series before I judge it, I at least need to see a duel first as that is the highlight of any Yu-Gi-Oh series. So for now I'm just waiting to see where we go from here.
Moon/Glovehead Berlitz! Make it a reality for a Berlitz reunion celebration!

I hope the fact Playmaker saved Blue Angel in the first episode doesnt imply its going to happen a lot of times.
For the time being, i will give Vrains a chance. 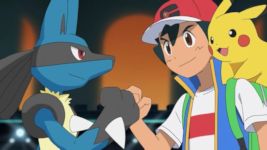 Zexal went with the 'Protagonist spends the duel getting pwn'd until he brings out his ace monster/invents a new method of special summoning and turns the duel around in the following episode' opening like Arc-V did. So yes, VRAINS is a first in that regard.
Some days you just can't force a smile. :<
M

Yce288 said:
I hope the fact Playmaker saved Blue Angel in the first episode doesnt imply its going to happen a lot of times.
Click to expand...

Unfortunately since she's a girl in a Yu-Gi-Oh series, she'll likely be saved several dozen more times. I didn't mind much when Yusaku saved her in this episode tho. I was more upset by Yusaku's monotone voice and the huge info dump all in the span of 20 minutes, which made things kind of confusing. ^^;

Staff member
Moderator
I guess we'll see Yusaku and Ignis freeing the other AIs one by one.

And SOL's CEO still has a higher up in the form of this mysterious "Bishop"..........well, a company owner being controlled is almost a staple in shonen shows. The scene is even presented like it's a secret from everyone else, as if they were actually conspiring to do something bad.

Also, Revolver looks as young as he was 5 years ago lol.

And I'm curious about whether we'll really see 3 zones dueling Speed Duel, or if it is just yet another "Riding Duel" (as in, regular 5 zones dueling with vehicle-based mechanic added)
My shinies. *shows off XD*

I just saw the first episode. Seems like they're world-building instead of jumping into a duel. I can get on board.

Don't care too much that Blue Angel was saved like that. Just hope it's not a reoccurring thing.

Yusaku seems like Yusei, except with a worse VA. I like the Knights of Hanoi or whatever, though. Ignis seems like he'll get annoying fast however.

Ignis seems like he'll be the comedy relief character in the VRAINS series, which I won't mind as long as the writers don't overdo it. Either way, I'm eager for the next episode cuz we'll actually witness a duel as well as Link summoning. ^^

OK 1 episode and what did think about it, it was OK. Yes there was a lot of plot and not a fully fledged duel (we did have that brief one though) which I think this is a first for the franchise, no major duel in the first episode, and I think it goes on for 2 episodes I think? And Yusaku, I was not expecting him to be a lone wolf type of guy but at least did does not make him a Yusei 2.0. So yeah pretty investing start for a new series, hopefully things speed up in the next episodes.