Staff member
Admin
Time for the next Pokémon and we're sticking in Galar! 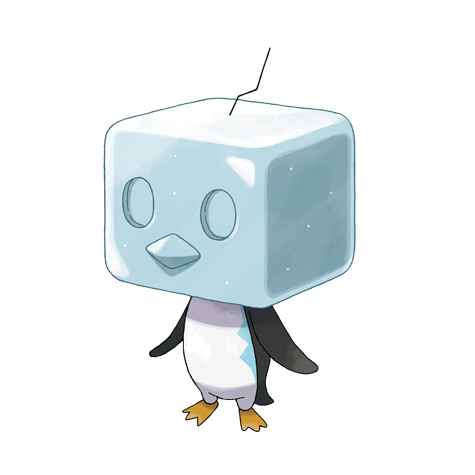 Before we begin, I would like to bring up that Kantonian Slowking CANNOT learn Eerie Spell...

Eiscue. The Penguin who walked into your freezer thinking that it was a magical door home, only to have an ice tray fall on its head.

Honestly, I would love to come up with additional options for this guy, but it’s a one trick pony. Belly Drum, Icicle Crash, Liquidation for type coverage. Maybe Substitute for setup, or hail to bring Frosty’s head back. Whispers of Agility on the occasion, but that’s about it. Reversal and Iron Head could be for Dynamax varience, or Aurora Veil sets because this Pokémon could buy a turn with that big head.
The craziest battle I ever had- Toxic spikes supported baton passing team, with a Splashing Wailord. And won. You have to try it!

Eiscue the Shield exclusive of the anti physical attacker that you find on the last route. Eiscue's gimmick is similar to Minior's; "bulky" initial form gives way to speedy second form after damage. However, Eiscue's bulky form outright nulls physical attacks a la Mimikyu's disguise. And its second form is blisteringly fast -same as Jolteon/Aerodactyl and the like. However, Eiscue's offenses are poor. 80 ATK is below average, 65 SATK is near unusable and its movepool is so shallow that Head Smash, Iron Head and Reversal are given consideration for coverage moves. Frankly, if Eiscue didn't get Belly Drum, it would be horrible. Instead we get a one trick penguin who is outed by any special attacks before it sets up.

Eiscue strategy is essentially Substitute on the first turn hopefully, eating a physical attack to turn it into its speedier NoIce form, Belly Drum on the 2nd while the Sub eats the hit, and then go for the Sweep at +6 ATK and +1 Speed making you near impossible to outspeed. At +6 Icicle Crash will OHKO anything that isn't an outright resist to it/Stupidly bulky on the physical side:

Substitute is heavily recommended as it blocks Status, which prevents Eiscue from executing the sweep and gives Eiscue a buffer against 1 special attack

Countering Eiscue
Special attackers. Without Physical attacks, Eiscue can't enter its super speedy NoIce form and remains shackled at a base 50 Speed and with a mere 75/90 Special Bulk attached to the famously frail Ice type, it is not hard to take down in that state (just be aware that after a Belly Drum Eiscue will more often than not OHKO you so make sure you get that OHKO). If NoIce Face is out and setup, priority moves bypass its blistering speed and will safely OHKO it given how super frail Eiscue is in that state, especially after a Belly Drum and Substitute.

Many Steel types, especially those who aren't weak to Reversal/Liquidation make decent checks, able to stomach a Belly Drummed blow and KO in turn (however, with how many are physically inclined, Ice Face needs to be down, or Eiscue will nab the 2HKO after stomaching a blow.

And that is the crux of Eiscue's problem, way too many outs to its win condition. If you have a special attacker, Eiscue literally cannot enter its dangerous speed form. If Eiscue is setup, it is so ridiculously frail that any priority will out it (and it has to be priority -not even Regieleki can outspeed a positive natured +1 NoIce Face). If you can get these out of the way, Eiscue is an instant win condition. Until then though, you are essentially playing 5-6.

Dynamax
Eiscue actually performs better in Dynamax formats. Max Hailstorm is a welcome buff to Icicle Crash, having perfect accuracy, even more power and sets up Hail, sending Eiscue back into its Ice face form, greatly increasing its bulk in conjunction with the doubled HP of Dynamax.
Last edited: Jan 9, 2021
I was once routed by a Gengar who critted 4 times in a row on my team. Morale of the story; Crits happen and Sucker Punch is good Gengar repellent.

Zen Headbutt is also a coverage option. And if used in Dynamax formats it will set up Psychic Terrain, thus removing the risk of being revenge killed by priority.
Also, I can't help but love this unfortunate penguin. It looks so down when it's Ice Face gets broken.